At Home in the Spotlight

Houston is Justin Yu’s hometown, but now, in the Bayou City’s emerging warehouse district, he has another new home. Chef Justin and his staff at Oxheart offer diners what has been described as a progressive menu, including a sting ten courses long.

Justin began his career under the mentorship of Ryan Pera at the restaurant *17 in downtown Houston. “He taught me new ways to think about food, and displayed the temperament of a successful chef,” says Justin. Ryan schooled him in team development and encouraged him to produce cuisine with creativity in addition to technique. Justin’s formal education at the Hyde Park CIA led him to Chicago’s Spring Restaurant, then later made his way to Ubuntu in Napa Valley. His next move was a bold one, heading to Europe for an unpaid culinary internship known as a stage (“stahjh”).

Geranium, Chef Justin’s stage venue in Denmark, was part of an aggressive initiative spearheaded by chefs René Redzepi and Claus Meyer to elevate the profile of the region in the European food scene. In the early 2000s they brought together noted culinarians and food professionals to create what became known as New Nordic cuisine, combining seasonal produce and traditional methods.

“The biggest thing I took from Copenhagen was to learn to live in an entirely foreign culture,” Justin reflects. There he learned to appreciate the Scandinavian culture, which some describe as stark. At Geranium, he saw that culture translated into a cuisine of simplicity, one that reinvigorated produce and revisited early preservation techniques such as salting, smoking and pickling. The New Nordic culinary aesthetic later helped him evolve his current ten course offering. “A lot of times the simplest food requires the most work to create. And then again, things that seem complicated aren’t at all,” Justin says. 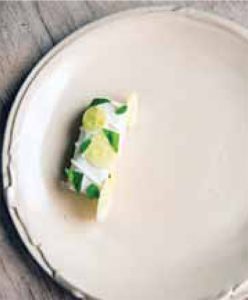 Justin returned home and opened Oxheart, where he was able to put his own personal stamp on what he learned in Denmark. He and pastry chef Karen Man have created a menu with an array of flavors prepared with simple techniques and world stylings. Among the selections are Justin’s mung bean pancakes stuffed with Louisiana shallots, potato and miso, with pickled Japanese turnips and burnt onions. Karen offers a crème fraiche cremeux with dried strawberries glazed in mushroom and sorghum, thyme and a dash of lime.

In a city of meat lovers, Justin was at the cutting edge of both flavor and technique. But Chef Justin soon began to build a reputation as Houston diners caught on to
his vegetable-centric menu that has often been described as progressive. “I think what marks it as ‘progressive’ is that it doesn’t encompass a singular ethnic or culturally identifiable influence,” Justin says. But his end product is not all that is progressive. His use of xanthan gum, agar, immersion circulators and siphons mark his departure from the conventional.

Word of mouth and media attention propelled Justin into a leading figure on the Houston culinary scene. Now at the forefront of local food culture, he says, “I think it’s a very young food scene with a lot of room for growth and a really fantastic diner base.” 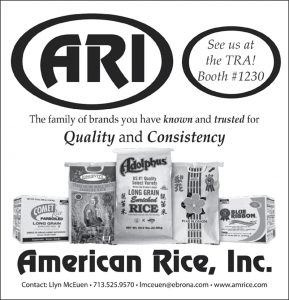 Chef Justin’s flavors and craft have earned him an enthusiastic local following, as well as regional and national acclaim. In 2014, Food & Wine Magazine named him
a Best New Chef and Bon Appétit listed Oxheart as a Best New Restaurant. In 2013, the James Beard Foundation nominated him for Rising Star, and in 2014 and 2015, Best Chef: Southwest. In 2016 he won their Restaurant and Chef: Best Chef Southwest category. Locally, for two years in a row Oxheart was name favorite restaurant of The Houston Chronicle’s food critic, Alison Cook.

Oxheart now occupies the bulk of his time, but Justin gives much thought to the future of foodcraft, specifically contributions he might make in his home city. “Eventually I would love to do something more casual, so I can feed more people some of the great produce and well raised meat and wild caught fish that we get,” he says. Justin enjoys seeing the return to the roots of food production. “I see a lot more people getting involved with food, whether growing it, cooking it, or serving it, and I think there’s a lot of room for some really fantastic restaurants,” he says of Houston’s burgeoning food culture.

While the spotlight is often on Chef Justin, he is quick to credit Karen Man and her many contributions. She is the force that greases Oxheart’s wheels overall and on a daily basis. A strong voice in the kitchen but also an effective business manager, she balances procurement, financing and efficiency. And still somehow she also manages to conceive and produce the delicious breads and desserts that round out the restaurant’s menu. “I dare say,” Justin says, “she’s more important to this place than any one of us, including me.”