For Pedro Sanchez, recent headlines are highly personal. Years ago, as people are still doing today, his family fled political and economic upheaval south of the border, and came to the United States in hopes of a more stable life.

His memories of childhood in Venezuela are good ones. From age six to his early teens, he spent summers at his grandfather’s house. They times they shared in the kitchen would have a great impact on Pedro in years to come. “He was retired, and he would cook all day, every day,” he recalls.

Pedro followed a well-marked path after high school. “In the culture and community where I grew up, you knew you would be a doctor, a lawyer or an engineer,” he says. He decided on the latter, and enrolled in college. To help pay for his education, he took a job in a fast food restaurant in 2001.

“My mother was not quite the cook my grandfather was,” recalls Pedro. He decided he could improve on their diet of ready-made meals and frozen foods, and started experimenting in the kitchen. “Then it occurred to me, ‘I could do this for a living,’” he says. 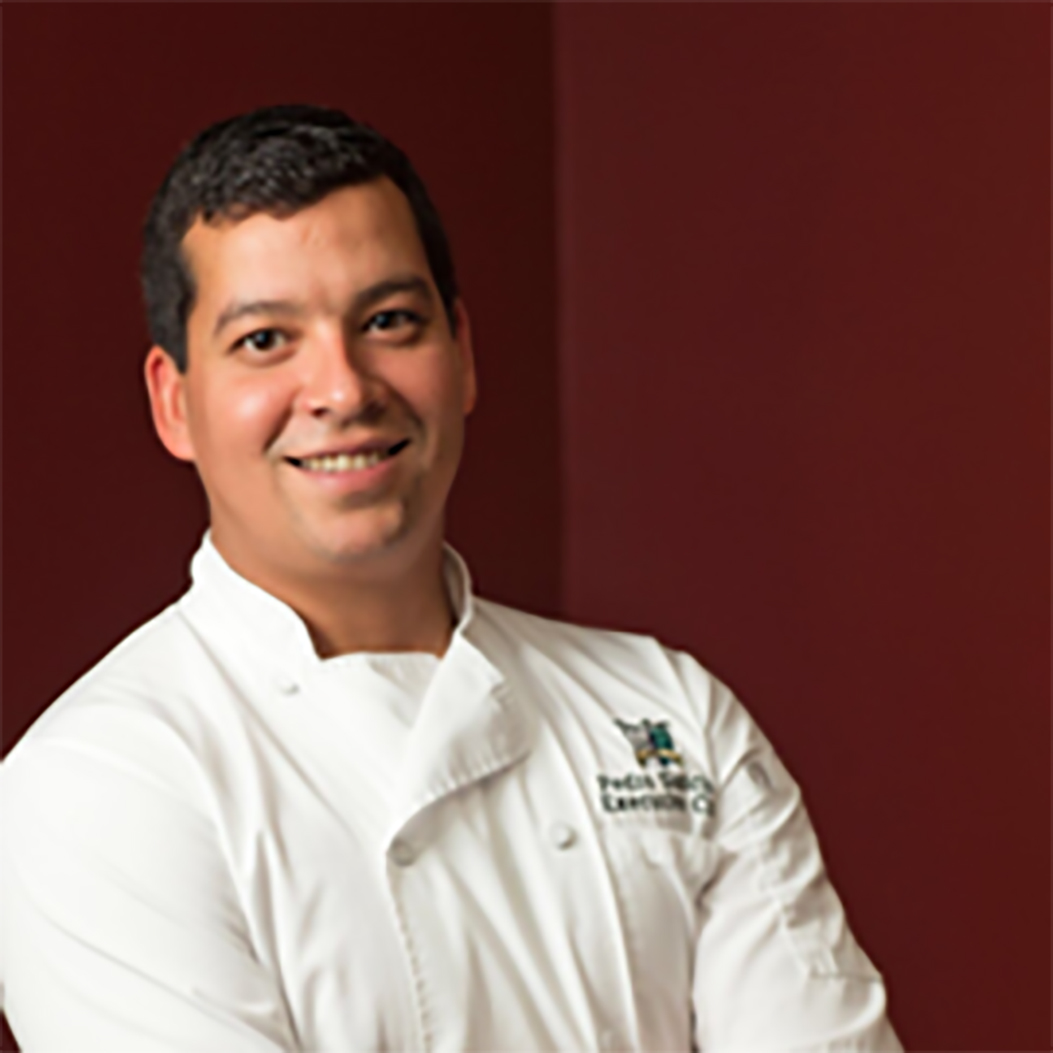 With no good options for culinary training at the time in Venezuela and political problems in the country reaching a crisis point, his family decided to move to the US in 2004. Once settled in Miami, he enrolled in Le Cordon Bleu.

After graduating culinary school in 2007, Pedro did his internship at a Florida resort under a particularly demanding chef. His first day brought him nearly to the breaking point. But encouragement from the kitchen’s other chefs proved a turning point. And the same chef that had almost reduced him to tears started moving him around the kitchen, teaching him recipes “and basically Kitchen 101,” he says.

Pedro’s first full-time job in the field was at Lakeside Country Club in Houston, followed by positions with Marriott and others that took him as far away as Washington, DC. In late 2012 he got a call from a former Lakeside co-worker who had moved into management at Braeburn Country Club, asking if he had interest in becoming a head chef. After some months of talks and a couple of visits to Houston, he decided to go for it.

Now at Braeburn since 2013, Pedro oversees a fine dining restaurant seating 120, a smaller and more casual men’s locker room venue, and the seasonal pool kitchen, along with a regular calendar of wine dinners.  In addition, he manages the club's large banquet operation, which may serve 50 to 700 at a time.

In exchange for more regular hours, country club foodservice requires a high level of personalization, according to Pedro. “Besides what’s required for our regular menu, I must also keep on hand 15 or 16 different ingredients for certain members. They might have allergies or be gluten-sensitive, or maybe just have definite preferences,” he explains.

“Having the same regular clientele is a challenge. We have younger members along with those who have been here since the 1950s—and I have to keep them all happy,” says Pedro. “Not too progressive, but not too old school either.” He has had to work to gained their confidence. Stepping in as Braeburn’s head chef at only 28 years old, his maturity and culinary skills have vindicated him. He is gratified when a doubtful diner tries one of his more adventurous daily specials and enjoys it. “And they no longer tease me about my mother dropping me off and picking me up at work,” he laughs.

Pedro is a committed chef, and hopes to complete his ACF certification by next year. However, beneath his chef’s toque is a brain that came within a year of earning a degree in engineering. “I’ve always been really good with numbers. I have a very analytical mind, always thinking two or three steps ahead, always calculating the most efficient way to do a project or preparation,” he says. He carries that approach into his kitchen. “I teach my employees that efficient is better, and to ask, ‘which way makes more sense?’ Numbers don’t lie—if something makes sense mathematically, that’s the way to go, whether it’s in cleaning house, making investments, or creating a recipe or a schedule.”

That mental discipline helps Pedro and his wife (also in the industry) maintain their work-life balance, especially important with the arrival of their first child a few months ago. With a new generation in the house, Pedro finds himself cooking more at home and making meals that remind him of his home country. “I left Venezuela fairly young, at 17, and didn’t fully understand its culinary traditions. Now that I’m a bit older, I’m exploring those flavors at home,” he says. “When I find a recipe I really enjoy, I take it to the club and make it little fancier, to incorporate something new into our menu.”

That is just one example of how Pedro keeps a menu centered around members’ familiar preferences fresh and appealing. He holds his guests’ interest by using new ingredients, and transforming familiar flavors into surprising forms and textures. A new sous vide machine confirms his enthusiasm for innovative techniques. “I’m not trying to go full modern culinary, but I want to offer our members a mixture of old world and new. It’s fun to put magic into my food,” he says. “I always want to have a surprise on the plate.”