When Mark Schneider dropped out of junior college and went to to visit a friend in Cincinnati, he thought he was just going to hang out and experience a new city. Enrolling in culinary school there, he wasn’t looking for a life path, just a way to indulge his passion for good food and entertaining. Mark had been watching cooking shows since he was twelve. Soon he began to recreate what he saw. By high school, he served meals of three to five courses to his family. “Everything tasted good and was served right on time—but of course the kitchen was obliterated,” laughs Mark.

Cooking was just a creative outlet—until his internship at Cincinnati’s Bistro on Vine. “When I got into the rhythm of the kitchen—prepping, setting up the line, cooking, having great nights, full ticket boards, all the chaos, craziness and success—I knew what I wanted to do the rest of my life, and never looked back,” he says.

In 2000, after stints in campus foodservice and country club fine dining, Mark signed on with WB Ranch in Whitney. The remote central Texas location was ideal for a corporate retreat, but made staffing a challenge. To cover each day’s service breakfast through dinner, his days began at 5:30 am and ended at 11 pm. The only time he saw his baby daughter was when she was asleep in her crib.

So in fall of 2002, Mark made a conscious choice to no longer be an invisible dad. He recalls, “I put my faith in that decision, and a week later my phone rang.” Texas State Technical College in Waco was calling, asking if he would be interested in joining their culinary program. “I had finished my culinary training there, so they knew me and my work,” says Mark. 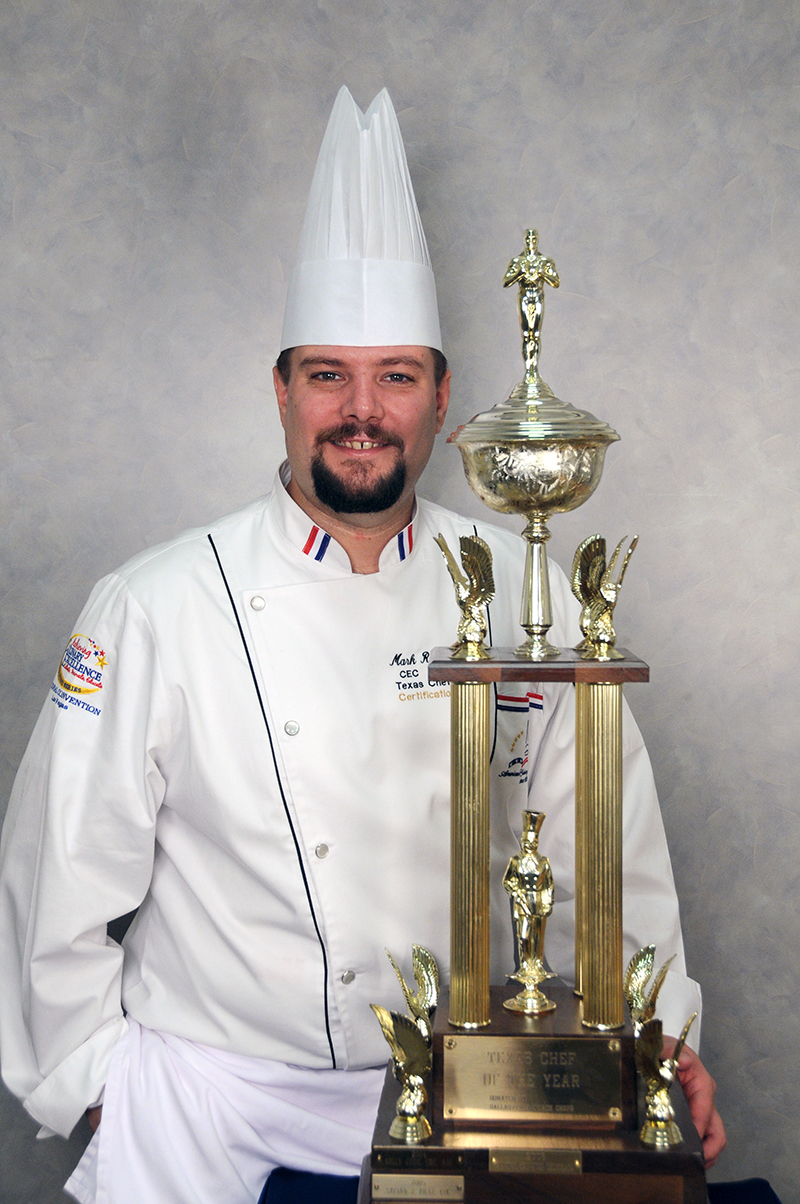 Mark has been at TSTC now for almost 16 years, beginning as Culinary Arts Instructor, moving up to Department Chair, and now serving as State Division Director. With more stability and regular hours, he now spends more time with his daughter and son. “And I get to cook for my own family on Thanksgiving,” he adds with a smile.

Mark honors that privilege by giving his all when on the job. “To push students toward their highest level of performance, our skills must be absolutely on point,” he states. “Especially for the younger generation, it’s important to impart professionalism and work ethic along with craft.”

“My work philosophy is ‘Work harder, better and faster than the next guy.’ This not only makes me better but also challenges those next to me to do their best,” Mark explains. Proving that point, he hasn’t taken a lunch break since his first day on the job in 2002 when his boss gave him an hour off for lunch. “I lived about four minutes from campus, so I went home and made a sandwich. Ten minutes later I was done and didn’t know what to do with myself,” he laughs. “Like any good line cook, I have no trouble finding something to eat throughout the day. We have three kitchens running on campus. If the savory kitchen is making roast chicken, I’ll grab some of that. But,” he confesses, “if I’m having a bad day I’ll go to the bake shop for a chocolate truffle.”

In his current position, Mark maintains standards and oversees programs for TSTC’s four campuses across the state. The program holds its own against its private competitors by offering quality training with certified chef instructors and the best ingredients—all at an affordable price.

Being an educator has broadened Mark’s appreciation for the full spectrum of the profession.  “I joke that our industry is ‘the hot dog vendor to the White House chef.’ Basic culinary principals and practice apply to all forms of foodservice, whether a student seeks to be a caterer, food truck entrepreneur, or run a deli,” he says. “If you run that hot dog cart, dice the onions beautifully, take care with the bun and use the very best hot dog.”

Mark’s list of achievements and awards is impressive. But he says he would not be where he is today without the Texas Chef Association. Somewhat removed from the more concentrated culinary centers around the state, he has found mentors from among his judges at TCA competitions, including Patrick Mitchell, Ernst Gruch and others. When traveling through Waco, they stop by and critique his plates and platters. He pays it forward by serving in various leadership positions with both TCA and ACF, working with local chefs, and mentoring students during their time at TSTC and beyond. He enjoys attending state and national chef gatherings, and keeps up with local TCA chapter activities by publishing the organization’s ChefConnect newsletter.

Mark admits his life in the culinary field has been demanding, but says he’s never doubted his choice. “There have been times that it’s 1:00 in the morning, I smelled like grease and had to do a 5 a. m. turnaround for breakfast service the following morning, and thought, ‘there has to be an easier life.’ But every day when I walk into the kitchen, put on my apron and don my toque, turn on the fire and get a little music going, it’s a whole new day of creation, making people happy and doing what I love to do. That’s how I know I’m in the right spot. The passion has never gone away.”