For most, a career is an end in itself.

But for Siegfried “Siggy” Schafner, it was simply a means.

“I knew when I was young that I wanted to travel. I decided that becoming a chef would give me the ability to do that,” says Siggy. He was set on the culinary path by a grandparent who imparted a love of cooking, and a father who secured a restaurant apprenticeship for him at age 16. After completing that informal education, Siggy then set off, as he had hoped, to see the world.  A year on a freight ship—which he describes simply as “very interesting”—was followed by five years in Sweden. “Then,” he says, “I got the urge to travel again, and went to Caracas, Venezuela where I met my wonderful ‘California girl,’ who is now my wife.”

For well over a decade, the pair traveled to Puerto Rico, then to Houston, to Los Angeles, and then back to Texas. Working in different kitchens along the way, including those of five-star hotels such as the Four Seasons, exposed Siggy to a range of influences. Although seafood holds a special appeal, he has not attached himself to a particular specialty. “Travel gave me a variety of cuisines, and as a result I now consider myself to be very creative,” Siggy says. “But to be honest, I’m not a baker. I’ve done garde manger and all the stations, but I’m not into not desserts or pastries.”

That range of experience and the creativity he nurtured along the way are serving him well in his current position. He is now executive chef at the Hurst Conference Center in Hurst, Texas, in the Mid-Cities area of Dallas/Ft. Worth. The busy venue serves a variety of clients, mostly for large national business events. In addition, they host local corporate customers including nearby Bell Helicopter, a number of large school functions, and some personal events.

When Siggy first arrived on the job, he kept the existing menu until he determined what was selling well, then made adjustments or additions as needed. The result is the present standard catering menu offered to clients by the catering sales staff. However, if a client wishes something not on the menu, the sales staff contacts Siggy to work out food choices which meet the client’s requirements. He enjoys these opportunities to stretch his creativity, and staff appreciates his willingness to adjust. “The salespeople enjoy that I’m flexible because they’ve known other chefs who didn’t want to change anything. We have a good relationship, plus it helps the center’s business,” he says. 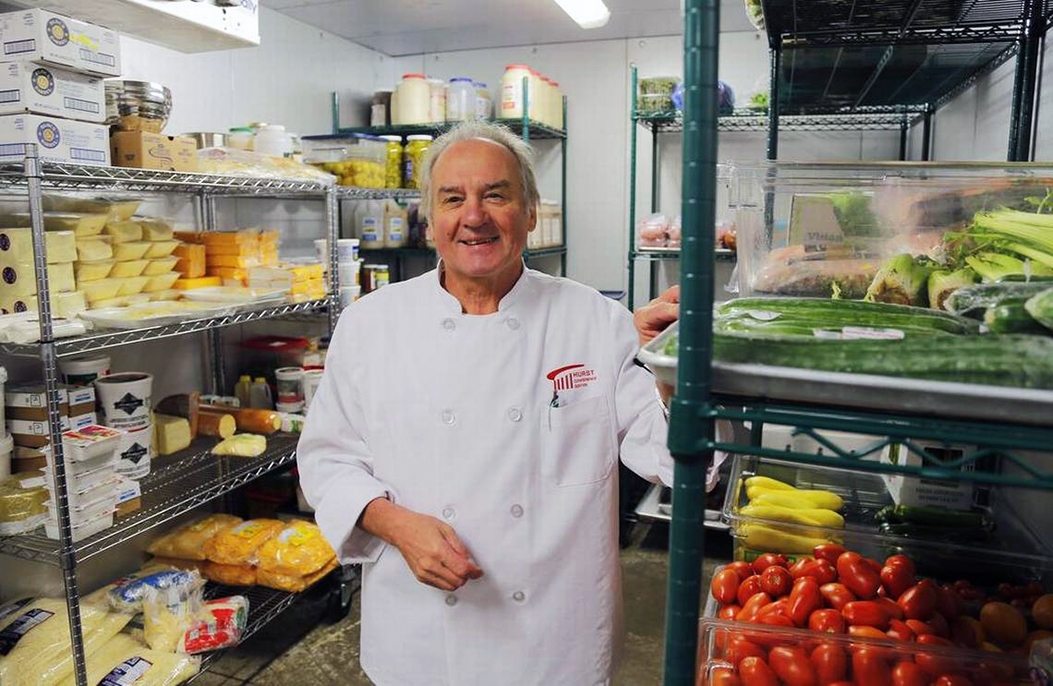 “On top of being creative, I consider myself to be a good organizer,” Siggy states. “If you visit my kitchen, you’ll see that it’s well-organized. I’m on top of food and labor costs as well.” The center’s finances were already in good shape when he arrived, but they have turned a profit for each of the three years under his leadership. “This is our team’s biggest achievement—the sales staff, banquet captain and myself,” he says with pride. “The money we make is reinvested to improve the business. We just bought a forty thousand dollar oven so we can more easily prepare five to six hundred meals, and recently put in new carpeting.”

The first two years in his current position were fairly demanding, but he has now settled into a balanced routine. Unlike the 24-7 operation hotel operations of his earlier career, this job allows him the flexibility and control to balance work and his private life. He is able to spend time with family, and enjoys skiing, fishing, hunting, hiking, and walking his Chihuahuas.

That being said, dealing with multiple different meal preps every day requires staying on top of things. Siggy has a fairly simple formula for managing ever-changing client demands. “First,” he says, “train your people. I do all the ordering and organizing, then I turn it over to people I’ve trained well. They know my style, because I taught them every single thing they need to know, hands on.” Their knowledge and skills combined with his confidence in them, makes for a smooth running kitchen. “And people stay with me. I don’t have a lot of turnover. My people know exactly what is expected. All I need to do is tell them the quantity we need and what we’ll be making, and they do the rest.” Currently he is assisted by one full time sous chef, and five part-timers, with temps filling needs for the center’s larger events. “But,” he says, “business has increased steadily for the last three years, so we need to increase our staff for improved consistency—we are in the process of working it out.”

To lay the groundwork for smooth daily operations, Siggy arrives each morning around 9. After greeting his staff, he receives product. He prefers to stock it himself to stay aware of inventory. Then he prepares the production list of what will be prepared, how much is needed and what to do, such as what needs to be seared, how many gallons of sauces need to be made, and so on.

Even with Siggy’s management duties, he still finds time to enjoy working in the center’s kitchen. “When I started here I was a bit more hands-on, as I showed them how I like things prepared. Now that I’ve been here awhile my staff has really stepped up. But I still jump in. I don’t like to live in the office or be on the computer all day. I’m on the go, and I make the rounds, I”m always visible. I like to jump on in with prepping,” he says.

Siggy’s present outlook reflects the concerns of his manager role, but he still retains his chef’s sensibilities. He says, “Of course you want to have food that is fresh, but it has to be tasty as well. I don’t believe in overly large portions, so there is not too much waste. Bottom line, food needs to be prepared properly to taste good—that’s what the customer enjoys.”