French celebrity chef Joël Robuchon has passed away at the age of 73, his spokeswoman confirmed to CNN Monday.

Robuchon owned and ran restaurants on three continents and was the world's most Michelin-starred chef, according to his website and his spokeswoman.

Robuchon, who had been suffering with cancer, died in Geneva, Switzerland on Monday morning.

The chef owned restaurants in cities across the world including Paris, Monaco, Hong Kong, Las Vegas, Tokyo and Bangkok.

One of his best-known recipes was for mashed potatoes.

Benjamin Griveaux, a spokesman for the French government, said Robuchon would continue to "inspire the younger generation of chefs."

In her book "L'Atelier of Joël Robuchon," cook and author Patricia Wells said the Frenchman would "undoubtedly go down as the artist who most influenced the 20th century world of cuisine."

She added: "To describe Joël Robuchon as a cook is a bit like calling Pablo Picasso a painter, Luciano Pavarotti a singer, Frederic Chopin a pianist."

Born in Poitiers, western France in 1945, Robuchon rose through the ranks at rapid speed, taking over as head chef at the Hotel Concorde La Fayette in Paris, at the age of 29.

In 1981 he opened Café Jamin in Paris, which earned a Michelin star in each of its first three years -- the first restaurant to achieve such a feat. 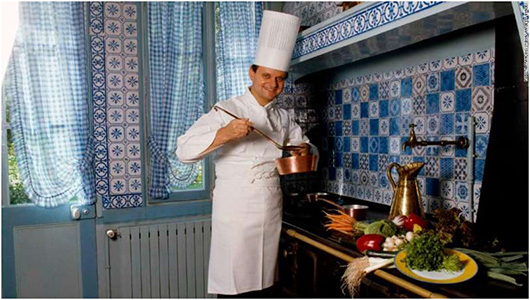 Eight years later, Robuchon was awarded the "Chef of the Century" title by the prestigious restaurant guide Gault & Millau.

In 1994 he opened Restaurant Joël Robuchon in Paris, which the International Herald Tribune acclaimed that same year as the best restaurant in the world.

He eventually opened his own brand of restaurants across the world, taking his cuisine across the globe.

In June 2018, his company closed its two restaurants in Singapore, with five Michelin stars between them.

Speaking to Business Insider in 2014, Robuchon said: "The older I get, the more I realize the truth is: the simpler the food, the more exceptional it can be.

"I never try to marry more than three flavors in one dish. I like walking into a kitchen and knowing that the dishes are identifiable and the ingredients within them easy to detect."

Robuchon was also known for his mentoring skills, helping to develop chefs such as Gordon Ramsay, Éric Ripert and Michael Caines.

Writing on his Instagram page, Ramsey said: "We've Lost The God Father of Michelin the most decorated Chef in the World, he kept all of us on our toes ! Even when we were sleeping! Merci Chef, God Bless."

In a tweet, the official French Michelin Guide wrote: "He was one of the greatest French chefs. Joël Robuchon has passed away, he was 73 years old. The MICHELIN guide mourns with his loved ones."