She wrote a weekly restaurant and food column for Katy Trail Weekly until shortly before her death. As an adjunct professor, she taught a class in food writing at the Mayborn School of Journalism at the University of North Texas for five years until this spring semester. Les Dames d’Escoffier, an organization of women dedicated to food and wine service, named a journalism scholarship for UNT students in her honor earlier this year.

A 5th generation Texan, Griffith was a Texas original, remembered by friends and colleagues alike as fierce and fearless, intelligent and loyal, and quicker-witted than anyone they’d ever met. 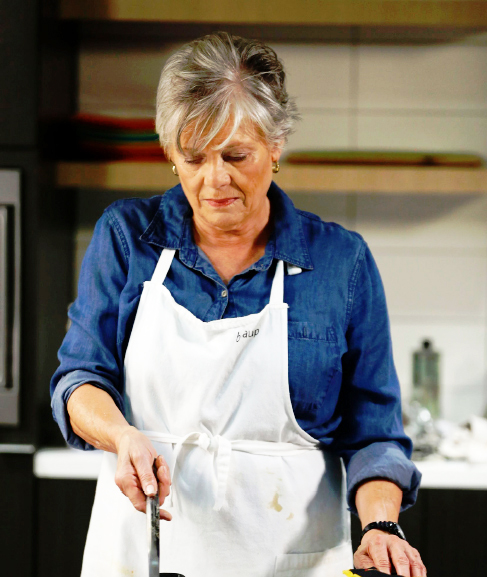 Griffith was a trailblazing journalist who took recipes out of newspaper “womens’ sections” and integrated them into serious discussions of cuisines and restaurant trends. Yet she was more than a food journalist. She was as comfortable talking about how to field-dress a deer as she was synthesizing complex political policy. All delivered with her signature rapier wit.

The author of 12 cookbooks and a prolific freelance writer for publications such as The New York Times and Southern Living magazine, Griffith served as the first director of communications for the ACLU of Texas and was often seen on television and featured at major events as the big Texas “personality” that she was.

“Dotty had that great Texas dry sense of humor,” says Dallas chef Dean Fearing, a longtime friend and cookbook collaborator. “She didn’t play favorites, even though she was friends with everybody,” he says, “and she held chefs accountable in a tough restaurant town.” 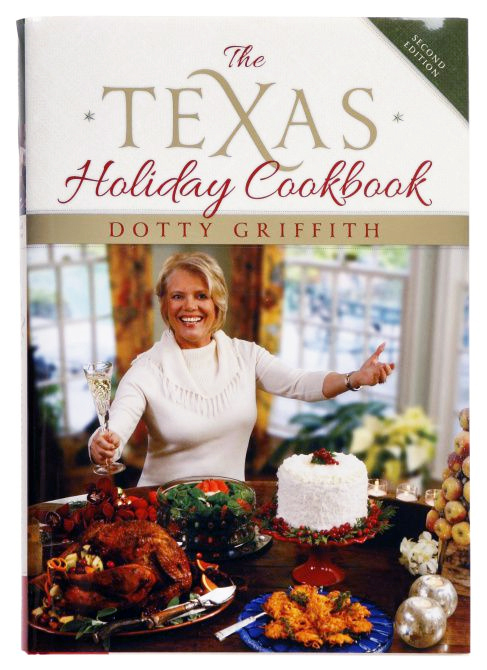 “I can’t always say that when she reviewed me at the Mansion [restaurant] that I always loved her reviews,” Fearing says. “She bounced me around, and I needed to be bounced around. At that time I was a lot on the road and not in the restaurant. It wasn’t up to par. And it was because of her that I truly said, ‘If I’m going to be a chef at the Mansion, I need to stay at the Mansion.’

“She really helped me come back to planet Earth and do what I need to be doing — being a chef and not being a big chef star.”

A big part of Griffith’s legacy in food journalism is her role in the birth of modern Texas cuisine and Southwest cuisine, which Fearing led along with chefs Stephan Pyles of Dallas and Robert Del Grande of Houston.

“Dotty steered Dallas into the modern food world,” Fearing says. During the early ‘80s, Dallas was mostly French, Italian and continental restaurants, and “you really had to be a rebel,” he adds. “I like the fact that she supported us and what we were doing [with Southwest cuisine]. It’s easy not to support if you didn’t get it or didn’t like it or didn’t think it was necessary. … Dotty helped create a standing for Texas food, supporting that and making sure we stayed with it.”

Her influence during her time on the James Beard Foundation Restaurant Awards Committee did a lot to establish Texas as a serious food region. She also was the author of cookbooks such as Wild About Chili, 1985; Celebrating Barbecue, 2010; The Texas Holiday Cookbook, 1997 and 2013, and The Ultimate Tortilla Press Cookbook, 2018.

Griffith began her career at the University of Texas at Austin, where she held many roles at the school’s newspaper, The Daily Texan, including covering legislature and state politics, and she graduated with a bachelor’s in journalism in 1972.

“She was really a pioneer,” says Bob Mong, University of North Texas at Dallas president and former editor at The Dallas Morning News.

Griffith began her 36-year tenure at The News in 1972 as a general assignments reporter. Mong remembers her as strong, smart and determined.

“She was part of a group of really smart women from UT,” he says. “It seems strange to say it now, but they wanted women to be represented in the newsroom.”

Terri Burke, longtime friend and Griffith’s editor at The News and later her boss at the ACLU of Texas, says Dotty showed any doubters in those early days that she had a depth of thinking and a quick, analytical mind.

“I’m fortunate to have a lot of friends who are clever and witty, and I don’t think I have any friend who is wittier or quicker than Dotty,” Burke says. Griffith once participated in a tasting at a Dallas hotel where Burke’s husband worked. “She told him, ‘You need to just lose some of this food.’ It’s become a catchphrase in our family. She didn’t mince words, but she gave good advice.”

Griffith became food editor in 1977. In 1996, Griffith became the newspaper’s restaurant critic, a position she held for 10 years. She retired from The News in 2006.

“She represented ambitious women journalists,” Mong says. “I thought she was fearless in the way she handled herself. She always had a point of view.

“The dining critic role itself, that’s always a tough job, and she brought her strong reporting skills to it,” Mong added. “And she didn’t just want the critic job, she wanted to make it into something. She really paved the way for future critics.”

Burke recounts one of Dotty’s famous phrases: “When I asked her why she moved to food, she said, ‘I discovered that more people eat than vote.’”

Griffith’s time covering food in Dallas was truly a renaissance and a time of evolution. Times were changing. Food sections were moving from catering solely to homemakers to coverage that took into account women in the workplace, and stories had broader appeal and deeper reporting. The restaurant world in Dallas was also evolving, from French and Italian restaurants to more creative and rebellious, chef-driven fare that sourced from local farms.

“She was there at a pivotal moment as our society changed,” Burke says. “I don’t know if she realized it at the time, but she was at the forefront.”

Mong echoes that she was one of the first people who really picked up on the Southwest cuisine movement in Dallas and Houston. “She really understood what was going on,” he says.

Griffith appreciated and understood Texas food, from chili to Southwest cuisine to Tex-Mex. She even played a pivotal role in the placement of the original frozen margarita machine, a Dallas creation, in the Smithsonian’s National Museum of American History. The machine was invented by Mariano Martinez of Martinez Mexican Cuisine restaurant in 1970, when, inspired by Slurpees, he adapted a soft-serve ice cream machine to create margaritas.

Griffith talked to her colleague at the Smithsonian, Dallasite Rayna Green, who was the curator of the American Food and Wine History Project.

“They did their research and the rest is history,” says Griffith’s longtime friend Dedie Leahy. “It was clearly Dotty’s recognition of the historic importance and value of that invention, which is so much a part of Texas history, and still a signature, wildly popular beverage today, that it deserved being in the Smithsonian along with Julia Child’s kitchen.”

In 2008, Griffith became public education director of the American Civil Liberties Union of Texas, first in Austin and later in Houston, working with her former boss Burke.

“I became executive director in January of ‘08, and I immediately called Dotty and said, ‘This is a mess and I need help,’” Burke says. “She came to just pitch in, to figure out what a communications department should look like, and she stayed five years.”

Burke says people thought she was crazy bringing on someone who had been a food editor, but, “She quickly showed them her analytical mind.”

She was quick-witted but in a way that really cut to the heart of the issue, which made her a fun friend and a great journalist.

Burke remembers a time when she had to immerse herself in the topic of drone usage in law enforcement. She studied for weeks.

“On my way to an interview, I ran into Dotty, and after a brief explanation, she said, ‘Oh boy, so you’re going to go talk about little boys and their toys, huh.’ So I said that line in the interview, and it became a clip on the Jay Leno show. … It’s just a great example of how she could really boil down an issue.”

Griffith returned to Dallas in 2013 as executive director of the Greater Dallas Restaurant Association but later left that position to return to full-time food writing and teaching.

She became an adjunct professor of journalism at UNT, creating and teaching a course in culinary journalism.

In more recent years, Griffith was recognized for her contributions to food journalism. In 2018, Griffith was named as a University of Texas at Austin Daily Texas Hall of Fame Honoree, and she also received the Legends Award from the Press Club of Dallas.

And though she had a long and trailblazing career, she is remembered by her loved ones as a proud mother, grandmother and friend.

Her two grown children are lawyers: Kelly Griffith Stephenson is an Assistant U.S. Attorney in San Antonio, and Caitlin Stephenson Porto is a litigation and criminal defense attorney in Kansas City, Mo.

“She’s a very loyal friend,” Burke says. The kind of friend who will step in and help at a moment’s notice. “Dotty is the original bionic woman. She has two artificial knees, two artificial hips and an artificial ankle,” Burke says. So when Burke’s elderly mother had her knee replaced and was out for six weeks in Houston, Griffith went down to help take care of her because “she knew best” about knee replacements. “She said ‘Here, I can help. I can do this.’”

“She’s as close to a sister as I could’ve had.”

Griffith was born to Edward M. and Dorothy Koch Griffith in 1949 in Terrell, Texas. She is preceded in death by her parents. She is survived by her son, Kelly Griffith Stephenson and his wife, Jessica (Jess) Gilles of San Antonio and their son, Griffith Philip Stephenson; daughter, Caitlin Stephenson Porto of Kansas City and her husband, Tom Porto, and granddaughters Isabelle Mary Porto and Genevieve Lee Porto; as well as Tom Stephenson and Sally Giddens Stephenson and their son, Jack, of Dallas.