Austin’s vibrant Tarrytown neighborhood teems with activity as residents jog, bike and walk their dogs along the tree-lined streets.  This trendy urban enclave adjacent to the Colorado River blends its vibrant past with modern architecture.  One of its newer treasures is FABI+ROSI, offering traditional European cuisine prepared with locally sourced Texas produce.

This project of restaurateurs Wolfgang Murber and Cassie Williamson began when they met on a cruise of Mallorca, Spain. A vacationing Cassie dined on Wolfgang’s delectable on-board fare, which led to a serendipitous meeting. They quickly developed a concept built around service and style. After agreeing upon a location, the two set plans for a FABI+ROSI opening in 2009. 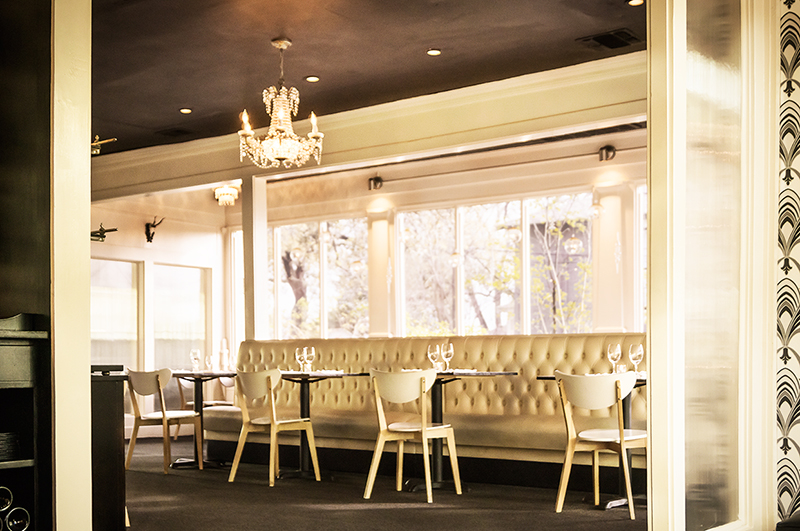 As Wolfgang honed his culinary skills at Germany’s Burg Hornberg Castle, he played with different ideas of opening his own concept restaurant.  After bouncing around Europe for awhile, he finally landed a position on a Balearic Island yacht along the coast of Spain, where he met Cassie.  They decided to plant their shared dream on terra firma, and found a suitable 100 year-old Craftsman bungalow in Texas’ capital city.

Outside, the patio is classic Austin. The white limestone gravel patio beneath a live oak canopy and bordered with mature agave plants provides a restful, casual setting.  At night, festoon lighting trickles through the tree limbs creating a distinct Texan ambiance. The native rock and succulents provide the perfect backdrop for wooden tables for four and additional larger concrete tables.

Inside the refurbished bungalow however, guests enter an upscale and distinctly European space.  FABI+ROSI’s black and white theme resonates tastefully beneath chic chandeliers and gives the impression of a private dining room with crisp white linen tablecloths.  A glass partition separates the main dining area from the pleasingly Old World banquet room which offers privacy for parties up to 24.

Behind the restaurant is hidden a keystone of Wolfgang’s cooking, and one reflecting trends in responsible culinary practices.  Somewhat unusual but perfectly fitting in this upscale Austin neighborhood, a chef’s garden grows. His harvest may find a home in the vegetable soup du jour, or in a daily vegan plate of vegetables and grains.

As one might expect from his respectful protein sourcing, Wolfgang does his own butchering. The resulting offerings round out a one-page menu that reads richly European with a Teutonic twist.  FABI+ROSI currently suggests seven seasonal items for sharing, such as escargot doused in herb garlic butter and topped with breadcrumbs.  Charcuterie boards are slowly gaining in popularity stateside, and Wolfgang offers three. His Käse Board comes with the Italian al tartufo, an off-white cheese with truffles, the Spanish larra roncal, a French triple crème brie, and the Spanish blue cheese valdeon.

Guests with an appetite for more German flavors order the Brotzeit board, or as the locals refer to it, the butcher plate.  It features a traditional bratwurst served with a light beer cheese, and house-made spicy mustard and pretzel.  Served alongside are pickled root vegetables, with a taste perfectly balanced sweet and acidic, and spiced with a delicate hand.  Also on the starter menu are oysters, mussels, beet Carpaccio and the Metzger board with chicken liver paté.

Second course offerings include a kraftbrüle, a beef consommé with bone marrow dumplings or the vegetable soup of the day.  Astute palates are delighted by a salad of fresh-from-the-garden arugula salad topped with a just-picked tomato.

FABI+ROSI’s dinner menu features flavors from two continents. Guests enjoy the best of both worlds, dining on the best Texas has to offer, such as scallions, potatoes and brussel sprouts, prepared using techniques found in upscale European dining.  German-inspired offerings include heritage pork schnitzel, rabbit stew and root vegetables.  Seafood lovers have a choice of the Spanish white fish merluza or lobster risotto with crispy leeks.  Fowl fans may decide between duck breast with creamy polenta or the chicken with kale and a sweet potato mash.  Guests preferring more traditional Texas fare order Wagyu beef in the sirloin or rib eye cut and a side of truffle fries.

FABI+ROSI’s wine selection includes excellent choices for any European meal. Their stock of sparkling, whites and reds come from several countries, and an informed staff is on hand to suggest ideal pairings for any dinner or menu item.  The reserve cellar provides a limited availability extended list for special occasions.

In March of 2017, Wolfgang participated in the Graf Zeppelin Wine Tour, a celebration of the zeppelin’s historic transcontinental flight. Teaming with German wine importer Traubenhaus, the two presented guest winemaker Robert Schätzle of Schloss Neuweier Vineyards to speak on history and technique. The presentation included a recreation of the aircraft’s original 1929 menu, plus appropriate pairings.