Although Cheers ran its final episode in 1993, there’s still a place “where everybody knows your name.” In the Upper Kirby area of Houston, The Raven Grill has been serving neighbors and creating relationships for just over 20 years.

The Raven is located just southwest of downtown, in the prime wedge formed by Main Street and the Southwest Freeway, and surrounded by some of the Bayou City’s most beautiful and established neighborhoods. Thanks to development patterns in place during the years these areas were built, tree-lined streets inspire residents to walk and bike for both pleasure and convenience. Judging by its success, the Raven is a favorite destination.

Owners Rob and Sara Cromie have a stake in a number of other restaurant ventures, but this keystone project was conceived as distinctly neighborhood casual. They began by selecting a name of local significance. Those familiar with Texas history might assume that means a link with Sam Houston, known by the Cherokee as The Raven. However, the Cromies were giving a nod to adjacent Edgar Allan Poe Elementary, titling the restaurant for its namesake’s most notable poem.

Although most Raven regulars hail from surrounding neighborhoods, the restaurant pulls from about a two-mile radius, including Houston’s trendy Montrose area. Diners come in from Rice University, the Medical Center, or even on their way to the opera downtown.

This diverse clientele is drawn by The Raven’s subdued and relaxing mood, according to general manager Bob Sutton. The venue’s footprint is small and includes no separate private dining area. But its approximately 50 seats are comfortably distributed between a bar area, inside dining space and outdoor patio, all unified by a warm and unpretentious décor. Available banquette seating offers extra intimacy. 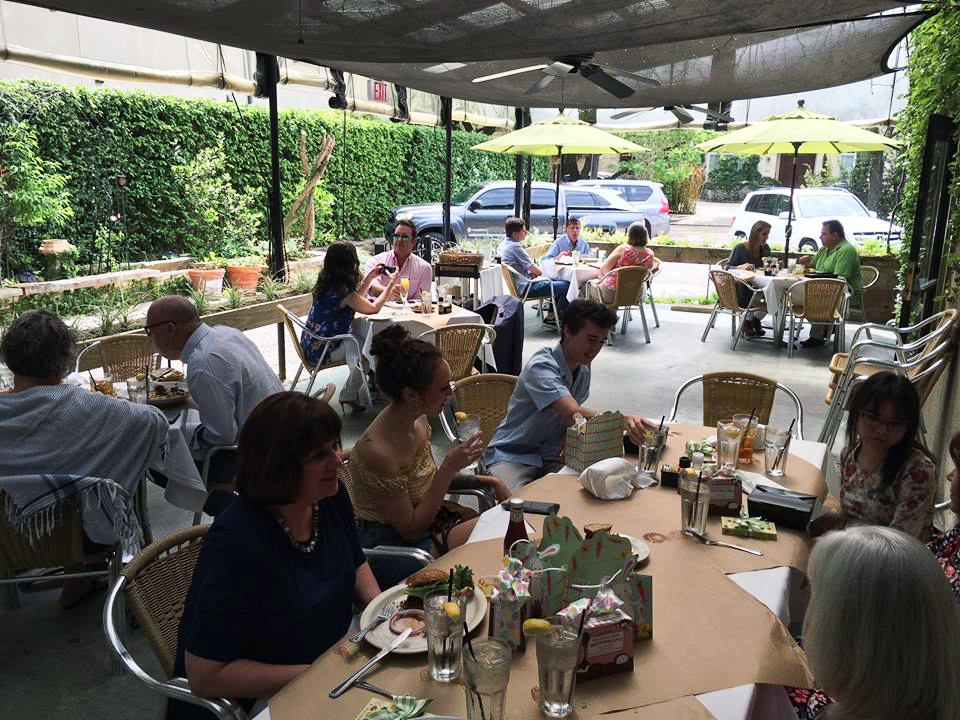 In addition to the laid-back atmosphere, Raven patrons are drawn by consistent offerings. “I’ve been here 15 years,” says Sutton, “and I’m always hearing ‘I love coming here because it’s so relaxed’ or ‘I love coming here because I can always find something I like.’” He continues, “We’re not chef-driven, constantly changing the menu. We definitely lean to the comfort side.”

But The Raven’s offerings are anything but ordinary. “We take simple things and make them not so simple. I’d describe our cuisine as American/Gulf Coast seafood with a bit of a Southwestern flair—a good representation of Texas,” Sutton explains. A wood-fired grill inspires much of the menu, producing favorites like cedar-plank salmon and grilled trout. Their pecan-crusted chicken is also popular, as is a salmon salad.

Fresh is the name of the game at The Raven. Fish and seafood arrive everyday, and sauces are made in house. The Cromies contribute output from their own beehives and chickens. They partner with a local hydroponic grower for items such as lettuce, tomatoes and herbs.

“Our biggest challenge is just getting noticed. It’s like we’re on our own little island over here,” jokes Sutton. Although not on a major thoroughfare or in a large retail center, The Raven nevertheless holds its own through consistency and relationship-building. Earning customer loyalty and a distinctive reputation is notable for any restaurant in a competitive metro market. For The Raven to do so in Houston’s most upscale dining-centric area is a true accomplishment.

Staff longevity, according to Sutton, contributes much to The Raven’s success. His co-manager Nevil Taylor was hired shortly after his arrival. Several staff members have been on board for nearly eighteen years. Busboy Teo started at day one. All are familiar faces to Raven regulars.

The Raven’s social media presence is primarily on Instagram and Facebook. “Our Yelp reviews are good, but we don’t live and die by them,” says Sutton. He continues, “You can read all the reviews you want, but what’s going to stick in your head is hearing a friend tell you about us. So we try to give guests the best experience we can.”

“Houston is a dining city, and restaurants come and go. But that we’ve been here 20 years must mean we’re doing something right,” says Sutton. “More than anything, it's just our personal connections. I’ve seen customers’ kids grow up, from being in elementary school at Poe to graduating from college. And they’ve seen mine grow up, too. Knowing people’s names when they come in—that’s what sets us apart. We’ve made customers, and we’ve also made friends.”