In the Bouldin Creek neighborhood of Austin just south of Lady Bird Lake sits a restaurant which by all reason should never have come to be.

Lenoir Restaurant is the dream of Todd Duplechan and Jessica Maher, a husband-and-wife team who faced long odds in making it a reality. Years ago they attended UT at the same time, but did not meet until they both moved to New York, working next door to each other for the same restaurant group. From the beginning of their relationship, they shared the dream of opening a restaurant.

The couple moved to Texas with that goal in mind. “But we didn’t have any money or idea of how to do it,” Jessica recalls. "We’d figure it out along the way.” They established themselves for five years, looking casually but with no funds to move forward. They did find one location with possibilities and secured a commitment for an SBA loan, but nothing materialized.

In July 2011, Todd was mired in an intolerable work situation, and he and Jessica were growing frustrated at their lack of progress. They set a deadline for themselves. Within two weeks, they found a realtor. Two weeks later they found a space. They still had no money, but persuaded a friend to invest. An emerging designer looking to expand his portfolio reworked their space free of charge. Working at warp speed, Jessica and Todd opened Lenoir the following January—just as their first child turned one.

Their location gamble paid off. As downtown property values skyrocketed out of reach, they opted for a location near the cultural draw of South Congress, in a trending area with houses built in the 30s, 40s and 50s. Their 30s space previously housed a café. “The building was awkward and the parking was limited, but we said to ourselves, ‘This is where we want to be,’” says Jessica. “We knew this was a community where we could build a solid customer base.”

They collaborated with the designer to create an warm and intimate space without breaking the bank. The building is only 920 square feet, with a dining space of only 600 square feet, which originally included a bar space. Since seating is at a premium, bar service has moved to the beautiful backyard. 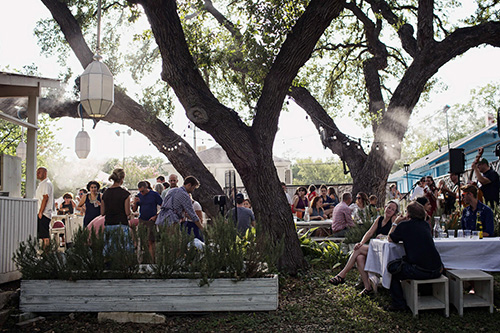 Inside, the seating capacity is 32, spread between a single communal table and several standalone for 2 to 4. Light-toned rustic furnishings and gauzy curtains wrapping the space create an aesthetic Jessica describes as modern shabby chic. Some items  were shopped from the owners’ home,  and lighting came from the Habitat for Humanity ReStore. The setting is cozy and contained, giving guests a feeling of respite from the world outside.

Seasonal local cuisine is now in vogue at many restaurants, but Lenoir takes it a step further. Jessica explains, “We call ours ‘hot weather food,’ characterized by heat, spice and brothiness. We use what grows here in the heat of Central Texas and in similar climates around the world.” The menu features small animal proteins and fish from the Gulf.

Food decisions, Jessica says, are not based on cost. “We use everything to fullest extent, and buy the best quality from vendors we know and trust. That’s more important to us than maintaining strict cost control.”

Over and above the uniqueness of their venue and their exceptional seasonal fare, their operating model sets Lenoir apart. Similar to the CSA (community supported agriculture) funding practice of independent farmers, the restaurant offers a CSR program. Three levels of participation are available. At the lower end of $1000 participants receive a $1200 house account they can spend however they wish—dining services, a gift card for friends, a bottle of wine. The top $5000 level buys a $3000 house account and a private dinner at the member’s home, complete with wine pairings.

Originally conceived as capital generation for the new restaurant, the program had a slow start. But over time as Lenoir became a known quantity, it has become tremendously successful. Subscribers are great promoters for Lenoir, and staff recognizes them like family. “We even throw them a special party each year,” Jessica says. Annual renewal rate is close to 100%. Guests renew each January, which infuses needed reinvestment funds at a typically slow time, allowing the owners to make improvements or replace equipment without incurring new debt or having to appeal to investors. “But best of all,” adds Jessica, “members get a good ROI and we get excellent word-of-mouth marketing and a lot of new potential customers.”

Jessica lists Todd as manager and chef, and herself as the pastry chef, but it is clear they both wear many hats. They rely on a small but invaluable team. Jessica reports, “It shifts over time. We retain staff as long as possible in a tough field by treating them well and giving them a good living. We appreciate each other.”

The dream they brought to reality by sheer will and creativity makes high demands on this young family. Yet somehow they make it work. They incorporate family time by bringing their two kids along on weekend trips to market. Jessica admits, “It’s hard. You have a lot of responsibly and not enough time to do what needs to be done. But,” she says, “you find ways to carve out the time.”