The Texoma region along the Texas-Oklahoma border is not a place one might associate with archaeological digs. But just a few years ago, treasures were unearthed at the corner of Travis and Houston Streets on the courthouse square, at the present site of the Old Iron Post Restaurant and Bar.

After a contract for a smaller property fell through because owners objected to a bar use, Sherman residents and investment partners Robert and Sherry Little and Steve Webb were scouting again. They found a long-unoccupied building that had served as a dry goods store for many years. In the 1960s it was ‘updated’ with nondescript stucco, drywall and dropped ceilings to house an office supply store. The most the property offered, they thought, was a good location. The original plans were just to cover up the drab and make the best of what they had. 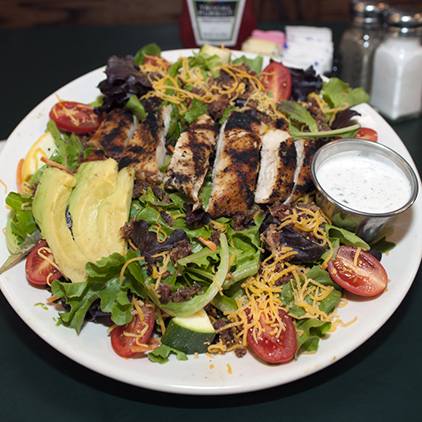 But jaws dropped as work began and workers peeled back layers. Those earlier so-called improvements had served to encase and protect the interior of the building’s first iteration, the M. Schneider and Brothers Building, a solid brick structure built in 1876 after an 1875 fire destroyed much of the frame construction in Sherman’s downtown. Many elements were remarkably intact, such as stained glass windows, an elaborate rear entrance, a sixteen foot coffered ceiling, and iron support pillars stamped S&B. The most stunning find came as the dropped ceiling was removed. The row of columns running along the building’s centerline, as it turns out, towered all the way to the old ceiling, and were topped with ornate leafed capitals.

Those unexpected treasures inspired a complete architectural reset. The resulting restoration is a knockout both inside and out, and respects the historic structure. The patio to the left of the Travis Street entry on the courthouse side is framed by the original iron pillars and ceiling beams. Inside, exposed brick walls, arched windows, and rich wood tones create a warm vibe. Backbone of the space is a 35-seat bar running along those spectacular centerline columns. An open floor plan creates a lively atmosphere, and the fireplace is a natural draw. The patio offers great people-watching and a prime view of the stately Grayson County courthouse.

Even with the bar dominant, the place maintains a family friendly atmosphere. Kitchen manager Kory Langford says, “What sets Old Iron Post apart is that we market to and draw from all demographic segments. All mingle and mix perfectly in our space.” General manager Seth Hearn agrees, stating that “With a bar running through the center, we work extra hard to make sure everyone, including families, feels comfortable and welcome.”

And clearly everyone does. Depending on time of day, the venue may be filled with lawyers and other professionals on court recess, couples from their 20s to 60s enjoying a date night, or college students hanging out. “We’ve recently concentrated on marketing to the Austin College segment, and the effort is paying off,” says Seth. 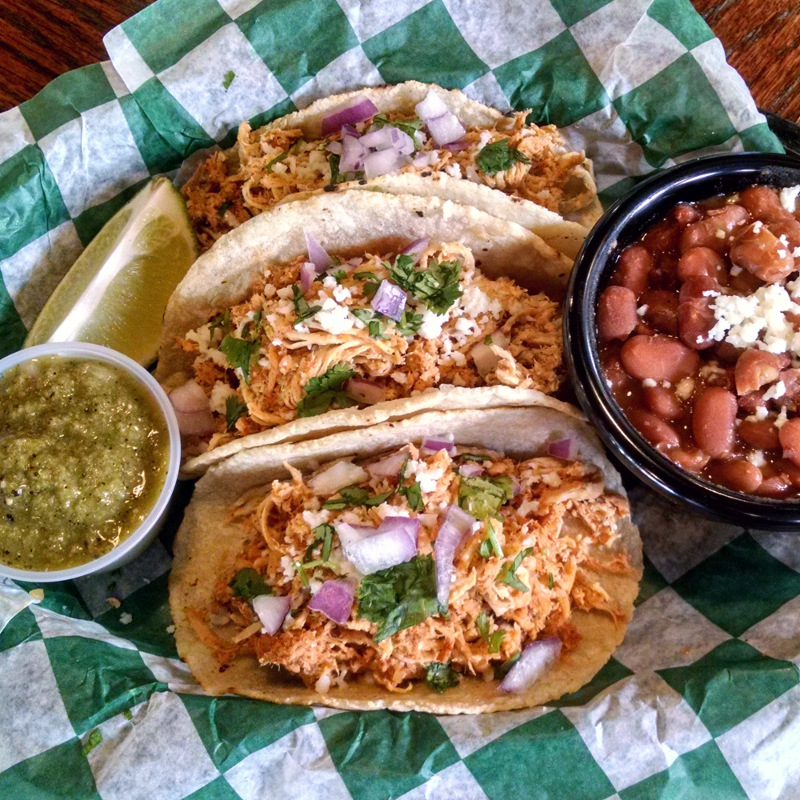 He continues, “Our number one goal is customer service. We aim to build an experience from the moment our customers walk in the door—from first bite to last—to the minute they walk out. We have attentive hosts, and excellent bartenders and servers. Our kitchen staff is hard working and passionate, with years of service in the industry.” The restaurant has been relatively free from turnover problems, and many staff members have been with Old Iron Post since its opening in 2015.

Old Iron Post is guided by a simple food philosophy. “‘Hot food and cold drinks’ is our thing. We make the stuff we’d like to eat,” says Seth. Kory’s kitchen team, including assistant kitchen manager Mikel Pfeifer, turns out a wide range of favorites, including all-American and specialty burgers, Philly cheesesteaks, sandwiches and salads. Their street tacos use tortillas made fresh daily right down the street. Kory adds, “Cheeseburgers are hands-down our customers’ favorite. We also offer Scotch eggs, a European dish uncommon in this area—hard-boiled eggs wrapped in breakfast sausage, breaded and served with Hollandaise sauce.”

Old Iron Post builds business with a strong social media presence. Their Twitter page is especially upbeat and fun, and a subscription email newsletter keeps regulars informed of a busy calendar of special events and promotions.

The restaurant connects with the community beyond its walls. Charity outreaches benefit nonprofits including The ARF House, a local animal shelter, and Women Rock, a breast cancer support and awareness group. Beginning this month, Old Iron Post will bring in guest bartenders, who will donate their tips to a selected charity. The first recipient will be Grand Central Station, a local food kitchen.

The combination of a bustling location and constant stream of diverse customers brings both opportunities and challenges. Kory and Seth agree there’s no typical workday. “Whatever you plan to do, something else pops up or we get thrown a curve ball,” says Kory. Clearly though, they’re up to whatever they see coming across the plate.