Building on the Southwest Theme

The morning crew at Via Reál restaurant nervously awaits the chef’s arrival. When he walks in the door, they inform him that there is nothing available for the daily special. But within minutes, Chef Jesus Olivares  combs the walk-in cooler, the pantry and his seasoning rack to find a handful of ingredients that will fill the bill. After tweaking composition, balance, and plating, he records it on the board.  Unruffled, this seasoned professional moves on to the morning’s next task. 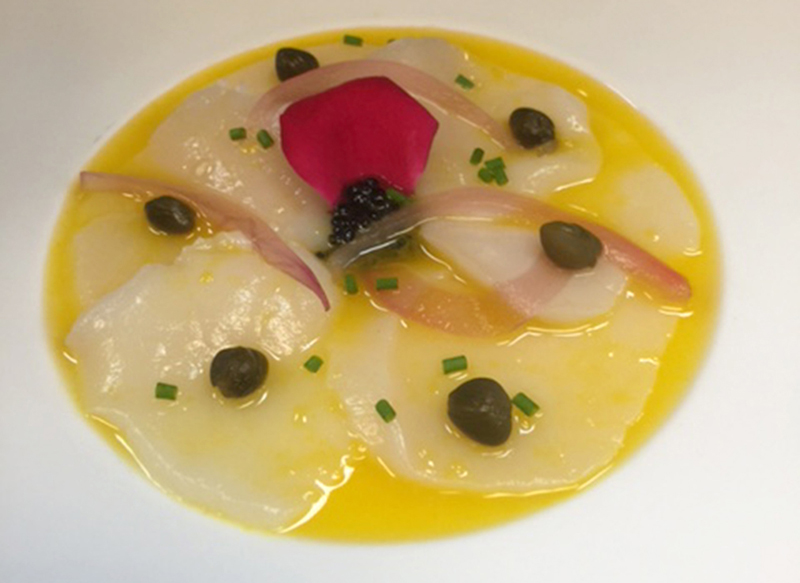 Over the past decade, Chef Jesus has become an institution at the Irving restaurant, and his creations have become menu staples. Much of his success can be attributed to his approach which merges traditional seasonings with New American cuisine, as when he looks at a piece of Gulf red snapper and considers blending it with just the right variety of pepper.

Instead of pushing the limits of the Scoville scale, Chef Jesus prefers a more nuanced heat profile. He favors the wrinkled, rich-flavored pasilla pepper over spicier options. The result is and a heartier dish with color and texture, and that maintains a protein’s integrity.

Such care with seasonings produces aromas recognizable to Via Reál guests awaiting their dinner. “We eat first with our noses,” says this intuitive culinarian. Chef Jesus puts as much effort into studying his guests’ dining habits as he does his plating, and this observation has inspired some of his more creative dishes. To keep the interest of his regular guests over the past 31 years, he mixes up his menu with items such as a signature pecan-crusted Chilean sea bass and a daily special of Carpaccio scallops with saffron lime couscous.

Jesus considers his creative combinations part of the New American cuisine.  But his culinary roots are long and deep in Mexican tradition, and he strives to maintain its culture.  Jesus was raised in Guanajuato, Mexico, and when he came to the US he landed his first job in Via Reál’s kitchen.  He moved between Los Colinas area restaurants, then Bob’s Steak and Chop House, Patricia’s Italian Restaurant and Texas Bar and Grill, then Via Reál called him back.

Early on the restaurant’s executive chef Felipe Gaytan rewarded Jesus’ aptitude for service and precision with added responsibility. A visual learner with impeccable observation skills, Jesus learned the craft by studying textures and sensibilities, and developed a knack for combining flavors. When Chef Felipe moved on, Chef Jesus was ready to step into his shoes.

His new position allowed Chef Jesus to chart his own direction as well as inspire others to share his vision.  While maintaining a recognizable Southwest influence, he brought a New American vibe to the Via Reál menu.  His clean presentation of seasonal ingredients and familiar proteins sparked with regional flavors continue to draw a steady stream of enthusiastic diners.

Chef Jesus has slowly but surely departed from some familiar norms to enliven the restaurant’s menu. In the garden salad, cherry tomatoes have been replaced with the more flavorful Roma.  Micro cilantro delivers a denser, fuller flavor than its larger and leafier counterpart. Entrée vegetables arrive seasoned with a finely diced blend of fresh sage, rosemary and thyme.  The Mexican calabacitas blends zucchini, green beans, broccoli and carrots.

Chef Jesus exhibits craft in his sauces as well. The 10 ounce beef tenderloin comes with the pasilla demi-glaze, a mango-basil sauce accompanies escalopas, and a robust red chipotle wild berry sauce is drizzled over the bone-in pork loin.

The lunch menu offers lighter fare, and reads like that of a restaurant at seaside Gulf resort. After ceviche shrimp and scallops in lime and tomato juice, guests may select salmon tacos with fresh spinach, avocado and pineapple-corn relish, or the Chicken Monterey topped with Texas goat cheese and roasted red bell pepper sauce.

Chef Jesus takes his culinary skills beyond the Irving kitchen and into the community. Via Real’s owner Fran Mathers, in the legacy of her husband Pat and instrumental in advancing Chef Jesus' career, hosts an annual fall gala in support of the Irving’s first responders.  The benefit funds scholarships for their children with a silent auction. As an auction item, Jesus offers an in-home prepared meal of Southwest fusion cuisine along with a wine pairing.  After consulting on dietary restrictions, Chef Jesus comes to the family’s home and prepares a selected menu, and for the evening provides an extension of the restaurant’s gracious hospitality.