For starters, Chef Christian Mailloux serves a canapé of smoked salmon and caviar, consommé a la royale, and an olive, celery and smoked almond plate.  These are unconventional appetizers by current standards, but identical to those on the menu of The Redlands Inn a century ago.

To celebrate the centennial of Palestine’s landmark structure, Chef Christian took his guests back in time by serving the same style cuisine served in the inn’s historic dining room 100 years ago.  “Think about it,” he says. “Chicken was a luxury item. There was no refrigeration, so a lot of things were pickled. Dinners went on for two hours with lots of conversation.”  His vintage dinner included poached roulade of flounder, Béarnaise roasted potato, asparagus, Champagne saffron vinaigrette, duck a la king, punch a la Romaine, beef tenderloin, and baby iceberg lettuce with Thousand Island dressing.

Developing the historic menu was a feat, but challenges are nothing new for Christian.  Christian and his wife Dawn purchased The Red Fire Grille inside Redlands Inn and now host both bed & breakfast visitors and diners who come to Red Fire from across the region.

The couple has traveled the country extensively to gather flavors from every region. Their trip through California’s Napa Valley was particularly influential. Chef Christian’s wine dinners highlight select varietals from a given featured vineyard.

“I like my wine dinners to be like a food roller coaster ride,” the chef says. Beginning with a variety of small plates, from soups to composite salads, Christian then runs the gamut, exciting diners with poultry, seafood, game, lamb, duck, or whatever he feels is fun and seasonal. At a recent wine dinner spotlighting the Coppola Vineyard, Christian introduced his guests to a unique chocolate pasta dessert.  Crème anglaise mimicked an alfredo sauce, and chocolate covered espresso beans suggested meatballs. White chocolate shaved over the top gave the appearance of parmesan cheese.

Guests come from the state’s metropolitan areas and throughout the east Texas to enjoy a menu created by Christian’s imagination and vision. It changes throughout the year, offering dishes made from seasonal produce and the freshest and best the region has to offer.

After graduating Hyde Park’s CIA, Christian made his way through several Florida kitchens.  After being featured on television at West Palm Beach’s Robb & Stuckey KitchenAid Culinary Center, Christian was hired as an on-site chef to do cooking classes and small intimate wine and beer dinners.

His engaging personality and ready smile make Christian a natural for media exposure.  In Florida, when working next to a local television station, he prepared a spread of easy to make, fun foods for an upcoming Super Bowl event. Now in East Texas’ he does morning food features for KLTV. Online, his recipes are showcased on the website for Perfect Puree of Napa. In print, Country Line Magazine recently named Christian as the Best Chef of East Texas. 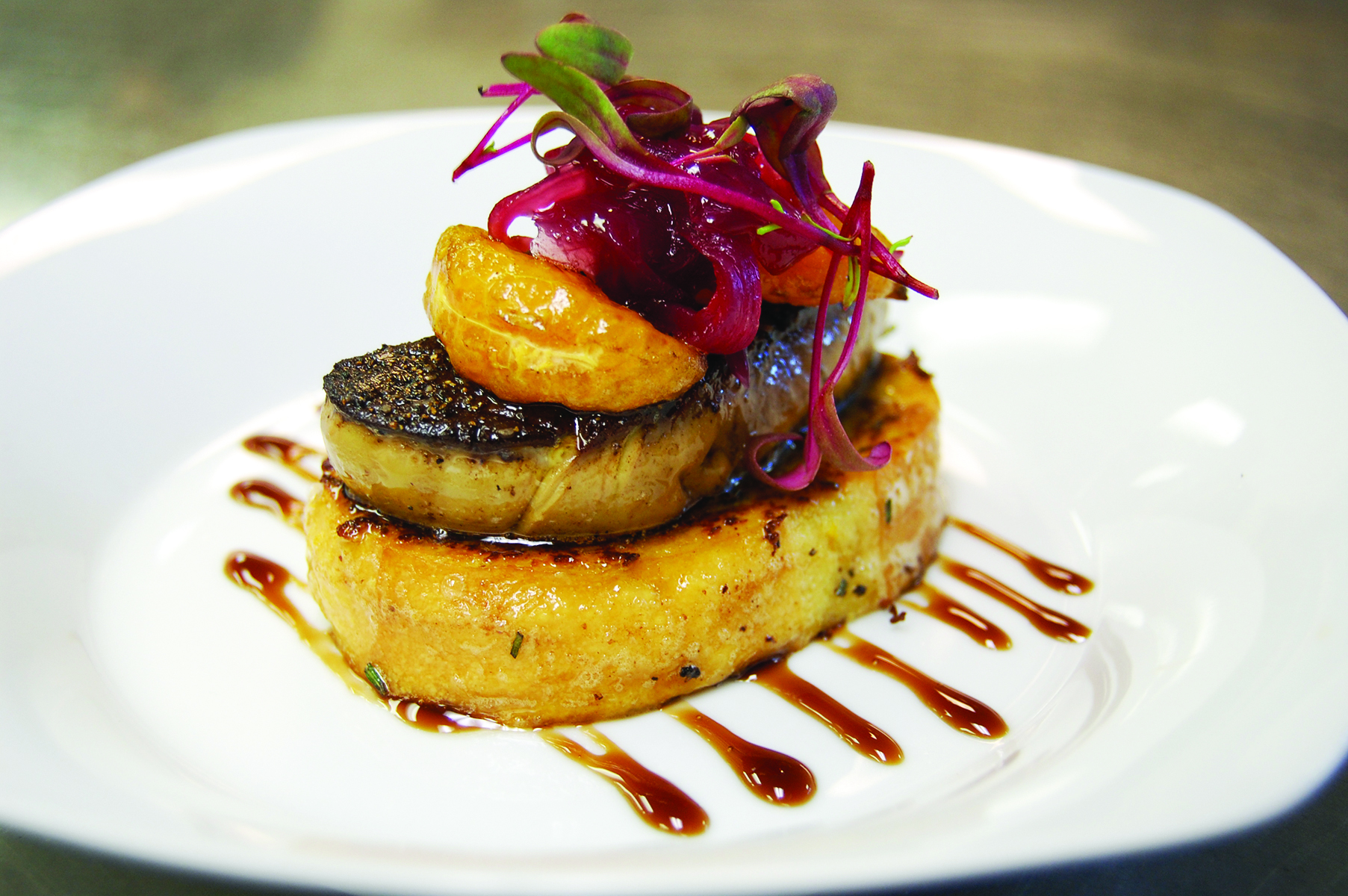 And just how did such a noted chef come to this small Piney Woods city of twenty thousand? Christian answers that, after working at a New England social country club for three years without a vacation, he and Dawn shopped the country for a restaurant associated with a bed and breakfast.  On a visit to Dawn’s parents in San Antonio, they took a trip over to Palestine, and immediately fell in love with the forested beauty of east Texas. When Palestine learned of their interest, the city wasn’t about to let them go. “They did their homework on us just as we did ours on them,” Christian recalls. When he and Dawn returned to the northeast, they could not forget the words they had heard on their visit, “Please don’t give up on this town. We need a restaurant with a chef of your caliber.”

After much discussion, Christian and Dawn knew they had found their niche. They moved from Massachusetts to Palestine, and opened the Red Fire Grille October 2012.  Red Fire quickly became the dining destination locals had been hoping for.  In the three years since, offering gracious service which has been compared to the quiet excellence of a Ritz-Carlton and a singular historic ambience, Red Fire has established a reputation throughout the region and across the state.

Slow moving ceiling fans and the couple’s tasteful Pandora playlist set a relaxed mood. Crisp table linens, fresh flowers and candles on covered tables complete the atmosphere in this venue which transports diners back in time.  Dawn reads the floor and controls the tempo, while Christian expresses his passion through food.

The Red Fire Grille draws visitors from Waco, Tyler, and Athens for an evening out.  Food bloggers drive the two hours from Dallas for the Red Fire experience. Guests from Houston can dine and spend the night.

“I take what I’ve learned over the years and try to do something seasonal and fun,” Christian says.  His close proximity to Louisiana allows him to draw on Cajun influences. March’s menu has an Irish touch. May features Mexican cuisine to mark Cinco de Mayo.

Even beyond seasonal variations, Red Fire’s menu changes frequently.  Christian’s may be the only restaurant in east Texas serving foie gras. “The nice thing about being an independent restaurant owner,” he says, “is getting to do whatever I want.”  Always searching to find something new, edgy and ahead of trends, Christian states proudly–emphasizing first syllables–“My menu doesn’t revolve, it evolves.”