When a young Gene Christiano headed west to find direction for his life, he found it not in the romance of the Rocky Mountains but in the kitchen of a local breakfast diner.

Gene graduated high school in ‘91 in Dallas with no plan for the future. He enrolled in a landscape architecture program but quickly found that was not his cup of tea. So he headed to the central Colorado Rockies and landed a job at Paradise Cafe in Gunnison. He started as a dishwasher but quickly adapted to the kitchen culture. Moving up through lead cook, prep cook and other positions, he found his inspiration. Determined to become an executive chef, he moved back to Dallas to enroll in El Centro’s culinary apprenticeship program. 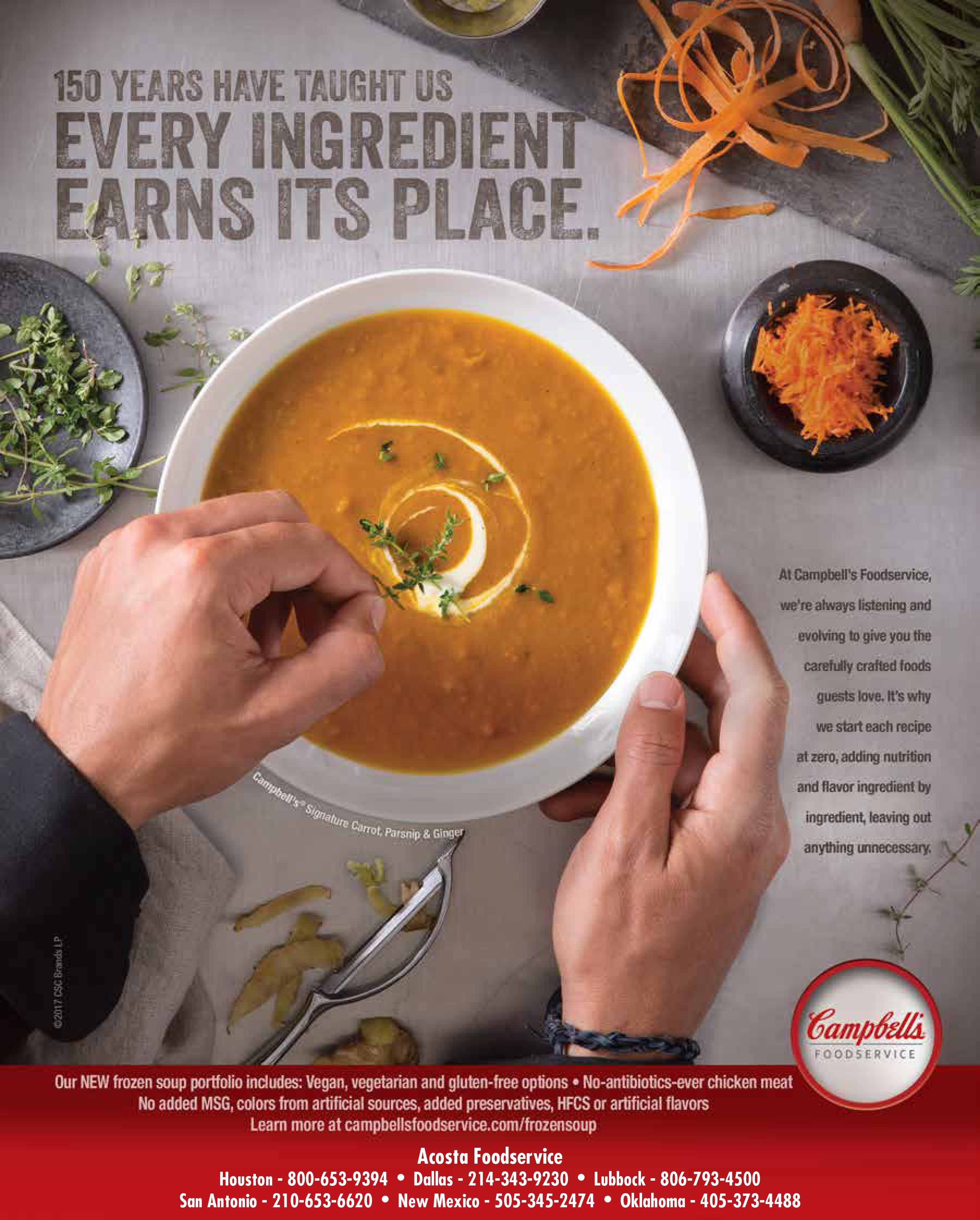 Gene was assigned to Culinaire’s Dallas branch, and received well-rounded training at venues such as Dallas Convention Center, Belo Mansion, Morton Meyerson Center and selected Embassy Suites. After 6000 apprenticeship hours and three years of basic education, Gene graduated in ’97 as Apprentice of the Year.

Gene saw the personal toll that fine dining and other elite positions soon took on his colleagues. Newly married, he was determined to maintain life balance for his family. “My goal was to learn how to manage people, money and food—not necessarily in that order,” he recalls, and sought a position in a system large enough to allow room for growth.

Gene brought a new vision to Canyon Creek. Two-for-one nights increased participation and sales. When he found out the course was slated for a major redo, he presented an evening of alfresco churrascuro dining on the practice green.

The 2008 recession drove a move to Central Market as executive sous chef. Gene developed promotions across the organization, including their first Passport event. He and Seven Fires chef Francis Mallman introduced Argentinian grill cuisine via high-end wine dinners in the parking lot.

After four years at Central Market under chef Otto Borsich, Gene realized his superior was firmly positioned for the foreseeable future. So when an email about a senior opportunity with Chartwells hit his inbox one morning, he jumped at the chance.

“Higher ed was a sector I had never considered, but it has definitely stretched me,” Gene says. Over his five years as senior executive chef of Chartwells’ operation at University at Texas at Dallas in Richardson, he has watched both the student body and his revenues double.

A new 800-seat dining hall provides an exciting visual for Chartwells’ tagline, Where Hungry Minds Gather. “College dining is no longer a stale, one-size-fits-all. Now it is more like a cruise ship—an experience, a destination,” Gene says.

Inside there are grill and wok stations, and ethnic foods offerings. The in-house bakery produces fresh breads and baked goods, along with allergen-free items. Outside, Gene utilizes spaces created by a recent redesign of UTD’s campus core. Each Wednesday, “Dine Alfresco” on The Patio offers other options, like grilled items, or perhaps a menu centered around the program’s delicious breads. Every second Tuesday under The Trellis, Pop-up Farmers Market features a locally farmed produce selection, such as tomatoes from Village Farms. 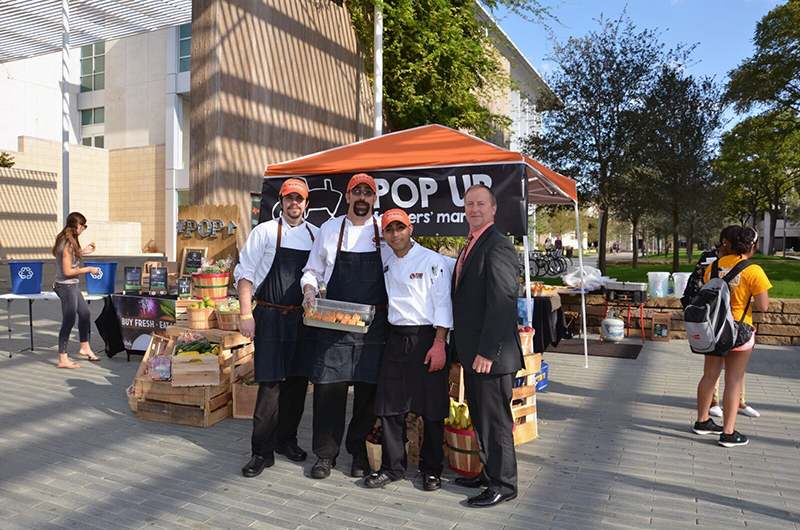 Executive Chef Gene Christiano (center) stands with Vice President for Student Affairs Gene Fitch (right) and two other workers on the first day of operation for the Pop-Up Farmers’ Market.

“It’s a challenge to bring excitement to guests who eat with us every day,” says Gene. Simon Sinek’s popular TED Talk, “Start with Why,” inspires him. “Millennials want connection. They want the story,” he explains. His CUISINE series—Chefs Unite In Search of Nutritious Entrées—sparks that interest by bringing in chefs like Pete Nolasco and Rodman Shields of Common Table to demonstrate food prep and interact with students and staff.

This accomplished chef is the current director of the Dallas chapter of the Texas Chefs Association, and was recently inducted into the Epicurean World Master Chef Society. However, he sees his profession not as an end but as a means to live out his values. “This environment gives me the great honor and privilege to work with people, to serve food and serve others. And campus dining allows a life balance. I’m family-centered, and I like to give back,” he says.  He just returned from a Harvey relief mission to Houston, and is training a group for a church cooking ministry.

Gene admits that meeting the demand for 90,000 meals every thirty days isn’t easy. To keep from being overwhelmed, he looks continuously forward. “There’s a reason the rearview mirror is smaller than the windshield. If we spend our lives looking backwards, we lose perspective. Change is inevitable and how we manage change is what make us successful.”