To Thomas Calhoun’s mother, clanging pots and wafting aromas were just part of everyday life in her kitchen. Little did she know that they were instilling in her young son a love of cooking that would determine his future. “I was always interested in cooking. Hanging around in kitchen felt natural to me,” says Thomas. His eyes were opened to the career possibilities of that interest thanks to the culinary program at his vocational high school in Arizona.

But Thomas wanted to make sure such a choice was right for him. So he took a two year break after graduating high school in 2003, then attended college to explore art and photography, and even dip his toe into medical studies at his father’s encouragement. None of these overcame the allure of the kitchen.

Training at the Scottsdale Culinary Institute campus of Le Cordon Bleu, Thomas first focused on savory but then was drawn to the challenges of pastry. As he accumulated more experience, he felt limited by the offerings and career opportunities afforded by the local food culture. To explore more progressive American cooking, he entered an internship at the Sonnenal resort in Vail in 2007 for about a year and a half. “They were a large hotel operation, which exposed me to different types of production, including standard hotel dining and banquets,” he recalls.

Thomas’ mother had since moved to the Austin area, and changes in the capital city came up on his radar. “Things were happening. There was a huge budding food scene, with new independent restaurants and named chefs coming in from all over. The cost of living was still reasonable, and there was still room for me to make a name for myself,” he says. In 2008 he packed up and headed to Texas.

Thomas settled in to learn the city and its culture, and explore his options. His first position was a one year internship at a sushi restaurant. There he honed his knife skills, and mastered the exacting formality of Japanese cuisine.

To further refine his pastry skills, Thomas accepted a position at La Condesa working under three-time James Beard Award nominee Laura Sawicki. After two and a half years, he agreed to help open a La Condesa in California.  “It was an awesome time, to be 26 years old with only myself to answer to. With my ego out of the way and under that kind of pressure, I learned a lot about opening a restaurant,” he says.

Thomas then returned his focus to becoming, as he calls it, “a proper chef.” He landed a position at Lenoir developing creative desserts within the framework of the restaurant’s guiding philosophy. “Seasonal ingredients are number one for them. My time there grounded me in seasonal menu development,” says Thomas. 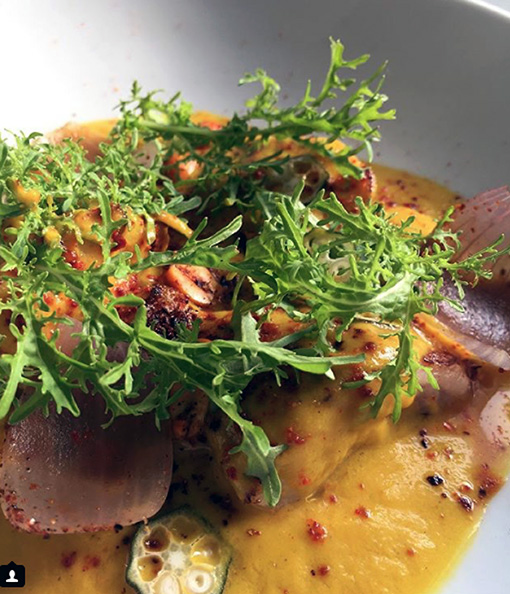 His reputation grew among diners and local industry professionals, including Aviary Wine and Kitchen’s owners Marco Fiorilo and John Coronado. Thomas had met the pair in the past, so he extended a greeting when he ran into them at a local coffee shop as they were looking at renovation plans. “I asked them how the project was going. They asked me if I wanted to be a part of it, so I did some tastings for them. Then one thing led to another and here I am,” he explains.

The remodel was more than just a building redo. It was a reincarnation of the restaurant, including Thomas’ complete redevelopment of their menu.  “I brought that seasonal aspect to Aviary. Cooking with the seasons means you harvest given items once a year, so what you create for the winter is entirely different than what you offer in spring and summer,” says the current executive chef. He begins with regional wines, layering onto them intriguing flavors built on seasonal local ingredients. Taste is always supreme for Thomas: “Layering flavors is primary—pretty comes second.”

Like any chef, Thomas deals with challenges. With no walk-in cooler, produce from local farmers and markets must arrive or be purchased each day. His kitchen has a small Japanese charcoal grill, but otherwise is all electric. “We adapt to its limitations. Our induction equipment gets hotter faster though, which is a plus,” says. The kitchen is tiny, and so, at most, only one to two days’ worth of food can be accommodated. And on top of all that, the kitchen is open to view. “The aesthetics are challenging sometimes—we all have to be on our best behavior,” he quips. 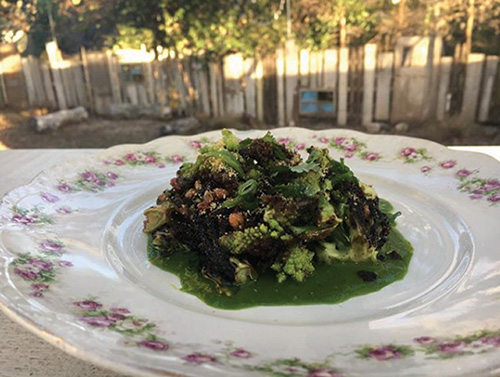 Thomas also acknowledges the personal challenges of his profession. “Being a chef is one of the most stressful jobs there is, and it requires sacrifices,” he admits. As his career is still growing, he is laying the groundwork for what he sees for the future. “Right now I’m married to my job. It’s both partner and child for me. You sacrifice as long as needed to get things where you want them. But right now it’s the right choice for me,” he says.

In the near term, he is focused on developing his menu and wine list, and helping the venture continue to grow. As for his personal long range goals, he confides, “I definitely would like to own my own restaurant. The opportunity at Aviary has given me a great chance to learn the ins and outs of operating a restaurant, and developing it from the ground up. So when the time comes for me, I’ll be prepared.”