Fort Worth, Texas - Chef, innovator, bon vivant, and local icon Walter Kaufmann peacefully ascended to that great kitchen in the sky on Tuesday, September 22, at the age of 91.

Walter was the architect of local fine-dining. After working as a sous chef at Ridglea Country Club and dining room manager of Colonial Country Club, the Lucerne, Switzerland native brought European-style cuisine to Fort Worth's non-country club members in 1964. HIs restaurant of 30 years, Old Swiss House, was a culinary station of the cross for area diners. Kaufmann's charm in the dining room was as legendary as the convivial atmosphere of his dining room and lounge. Broadway songs were performed nightly by pianists James Davis and Danny Wright, with Betty Buckley on vocals. More than a culinary beacon, Kaufmann's restaurant democratized great food, as restaurant-goers from all walks of life spent birthdays, anniversaries, and every other imaginable occasion in Walter's meticulous care. 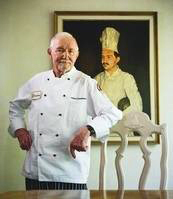 Walter briefly retired in 1993, until Chef Louise Lamensdorf hired him to run the dining room of Bistro Louise, where he worked for nine years. He didn't exactly ride off quietly into the sunset during his golden years. In November 2009, he joined Fresh Point Dallas as a chef consultant, working with his longtime friends from the LaBarba family and Steve Poole. His position there allowed him to pay visits to and mentor up-and-coming chefs, restaurateurs, line cooks, general managers, servers, and sommeliers. Hundreds of these service industry professionals valued the warm support Walter showed everyone he met, making them feel noticed and appreciated. He worked part-time until his actual retirement two years ago, at the age of 89.

Walter accrued too many awards and honors to mention, but he was especially proud to be the recipient of the Fort Worth Food + Wine Foundation's Lifetime Achievement Award — an honor that was named after him at its inception in 2015. He used his celebrity to give back to the city that he said gave so much to him. He founded the Culinary Library of Texas, a vast collection of restaurant menus and cookbooks by local authors, housed at the Tarrant Area Food Bank. The Walter Kaufmann Chef's Holiday Pantry has raised thousands of dollars for the TAFB. He was named board member emeritus of the Tarrant County Chapter of the Texas Restaurant Association, and he served on the boards of the Texas and Fort Worth Chefs Associations.
Walter is survived by his wife Glenda Kaufmann, son Kenneth Kaufmann, stepdaughter Becky Miller and husband Scott, grandchildren Garrett and Zoey Miller, nephew Robert Penix and wife Roxanne, family members Chris Clifton and wife Crystal, Bob McCamey and wife Becky, and the thousands of lives he touched and influenced through his generous and kind spirit.

The family would like to send special thanks to Dr. Alan Davenport and Dr. Frank Liao, who kept Walter with us much longer than we anticipated; the staff of Community Hospice of Texas, who provided such wonderful homecare services; Chaplin Terry Little, doctors Agena and Chang, and all of the 4th-floor nurses at the James L. West Building, who are truly angels and helped him rest so peacefully; and the residents of Hampton Place, who are more like family than neighbors.

True to form, Walter is helping others even after his passing. He donated his body to the UNT Health Science center for research. He is now reunited with his first wife Nancy, his best friend Ben Green, and all of the culinary icons who he loved and revered. We're certain Walter is enjoying a nice glass of wine at heaven's "Les Amis d' Escoffier Society" dinner while toasting to all the happy memories he made in Fort Worth.