All 50 states and DC added restaurant jobs in June, but staffing levels remained dampened in nearly every state.

Restaurant employment rose for the sixth consecutive month in June, according to data from the Bureau of Labor Statistics (BLS). Eating and drinking places* added a net 194,300 jobs in June on a seasonally-adjusted basis, which capped off an increase of more than 1 million jobs during the first half of 2021. 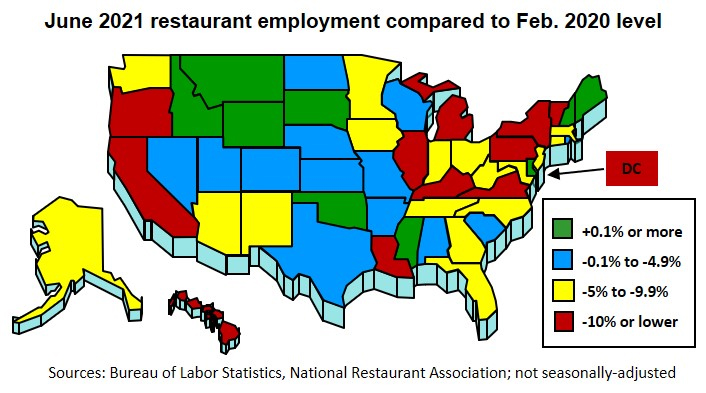 In 9 states, eating and drinking place employment in June 2021 was higher than their pre-pandemic levels in February 2020. However, 3 of those states – Maine, New Hampshire and Delaware – generally see significant seasonal staffing gains during the summer months, as restaurants gear up for the travel and tourism season. As a result, a February 2020 to June 2021 comparison does not provide the best read on the extent to which restaurant employment is recovering from the pandemic losses.

Instead, when compared to June 2019, only 4 states – Idaho, South Dakota, Wyoming and Mississippi – had higher restaurant employment levels in June 2021. In contrast, eating and drinking place employment in 24 states and the District of Columbia was down at least 10% during the same period.

View the employment data for every state.

[Note: The BLS monthly employment dataset measures jobs during the payroll period that includes the 12th of each month. Changes in restaurant staffing levels – both negative and positive – have occurred rapidly during the coronavirus pandemic, as restaurants quickly adjust their operating status in response to evolving regulatory and economic conditions. As a result, significant changes likely occurred during the weeks between each measurement period, and the monthly data may not fully capture the total job losses experienced during the coronavirus lockdowns. Still, the figures are a useful indication of the extent to which restaurant employment is recovering in each state.]