TRA Inducts Restaurant Legends to the Hall of Honor 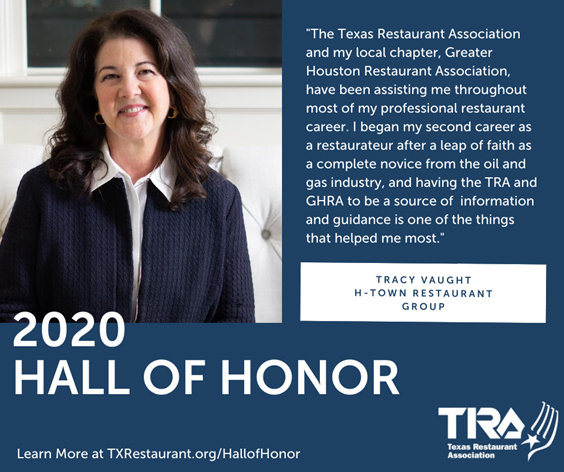 Restaurateurs Tracy Vaught, owner of H-Town Restaurant Group in Houston and David Cole, Co-Owner of i Fratelli Pizza based in Irving, will be inducted into the Texas Restaurant Association’s (TRA) Hall of Honor on Sunday, August 16 at 5 pm during a virtual Texas Restaurant Awards presentation.

The Hall of Honor is the highest award the association can bestow. Qualifications for the honor are rigorous - nominees must have been a TRA member for a minimum of 15 years and exemplify superior business ethics. Criteria include significant time and energy devoted to the TRA and its members, as well as to his or her local chapter. Nominees must also help build the image of the food service industry overall. 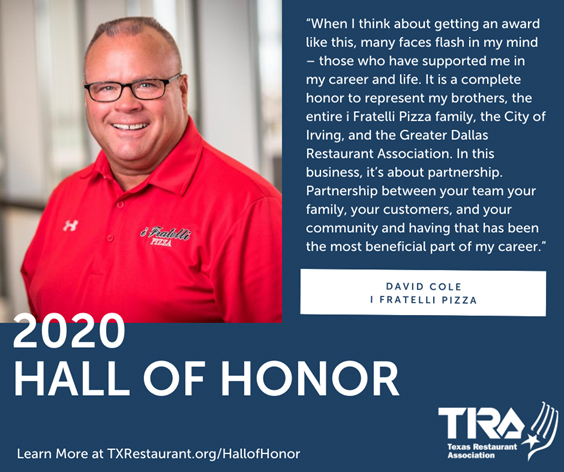 The virtual ceremony kicks off six days of education, demos, and networking sessions as part of the virtual TRA Marketplace event.

“Tracy and David are beyond deserving of this recognition,” said Dr. Emily Williams Knight, President and CEO of TRA. “Both are exceptional leaders, successful entrepreneurs, and outstanding representatives of the hospitality industry across Texas. This is the highest honor one can earn and nominees undergo a lengthy and comprehensive evaluation by an esteemed group of restaurant leaders. With the current state of the industry and what we have gone through, I am proud and humbled to induct these incredible leaders into TRA’s Hall of Honor.”

Tracy Vaught may have been as an “accidental restaurateur” when she tried her hand at the hospitality industry more than 35 years ago, but she is now one of the most respected in the field. The geologist-turned-restaurateur opened her first restaurant, Backstreet Café, with her uncle in an old house on the edge of Houston’s River Oaks neighborhood. It was the turning point of her career and life.

She met and married Hugo Ortega, whom she hired to work at Backstreet Café, and together they have opened Hugo’s (2002), Caracol (2013), and Xochi (2017), and published two cookbooks.

Tracy is also co-operator of Third Coast Restaurant and conference center, located in the Texas Medical Center, and part owner of Prego restaurant in Rice Village and Origen restaurant in Oaxaca, Mexico.

“The Texas Restaurant Association and my local chapter, Greater Houston Restaurant Association, have been assisting me throughout most of my professional restaurant career. I began my second career as a restaurateur after a leap of faith as a complete novice from the oil and gas industry, and having the TRA and GHRA to be a source of information and guidance is one of the things that helped me most,” said Tracy. “Now, 37 years after I opened my first restaurant, the Association has been more supportive and meaningful to me than ever before.  This year, their help has been critical in navigating the changing national messages about the COVID-19 pandemic and its incredible impact upon our important industry. TRA is more vital than it has ever been, and Emily Williams Knight is leading the way with extraordinary acumen, leadership, and resolve.”

David Cole founded i Fratelli Pizza with his brothers in July 1987 in Irving. Since then, they’ve opened 20 more stores primarily in the Dallas/Fort Worth region, with outposts in Austin and Houston.

David began his career in the restaurant industry by working at a donut shop in high school. Afterward he learned more about the business by working with family at Campisi’s Restaurant. Following education at El Centro College where he earned an Associate’s Degree in Food Service Operations, David and his brothers George, Mike, and Darrell opened i Fratelli, which means “the brothers” in Italian.

David has been a mentor for countless employees and younger family members and spends a great deal of time giving back through volunteer efforts in the Irving area. He is currently a member of the Texas Restaurant Association Board, the Irving Salvation Army, and the El Centro Food and Hospitality Institute Advisory Board. He has held board positions with the Irving Convention and Visitors Bureau, Irving YMCA, the Greater Irving/Las Colinas Chamber of Commerce and the Las Colinas Association. He is also a past president of the Greater Dallas Restaurant Association.

“David’s love for our industry is generational,” said Chef Sharon Van Meter, Owner of SVM Productions and current Chairwoman of the Texas Restaurant Association Education Foundation. “He has a heart in educating the youth and the future of our industry but will also take time out to help other restaurateurs. David just gives back every chance he can to help others.”

“When I think about getting an award like this, many faces flash in my mind – those who have supported me in my career and life.” said David. “It is a complete honor to represent my brothers, the entire i Fratelli Pizza family, the City of Irving, and the Greater Dallas Restaurant Association. In this business, it’s about partnership. Partnership between your team your family, your customers, and your community and having that has been the most beneficial part of my career.”

Last year the Hall of Honor award was presented to Estella Martinez of Dallas, Roger Lumley of Tyler, and Mike Shine of Houston. Over the past 34 years of the award’s history, there have been 126 Hall of Honor inductees.