Darlene Jacobs has her own take on the real estate maxim ‘Location, location, location.’ She’s happy to leave prime locations along well-traveled thoroughfares in high-density cities to others. Her Five D Cattle Company Steakhouse and Meat Market in tiny Avinger, population 444, tucked into the northeast corner of the East Texas Piney Woods, is in its twenty-third year of successful operation. “We’re 30 minutes from Longview, Marshall and Mount Pleasant, and only about an hour from Shreveport,” she says. “I tell people we might be in the middle of nowhere, but we’re also in the middle of everywhere."

Darlene’s parents Doug and Demeris Jacobs started the operation back in 1997 when her dad retired from the nearby steel mill. He decided to open a restaurant where his family had lived for generations. e grew up on a farm helping his family process their own meat, and he later spent years as a USDA meat inspector. And during tough times at the steel mill, Darlene and her siblings worked alongside him as he processed beef, pork and chicken for their table. So he would serve what he knew best, and name it for his family’s “five Ds.” 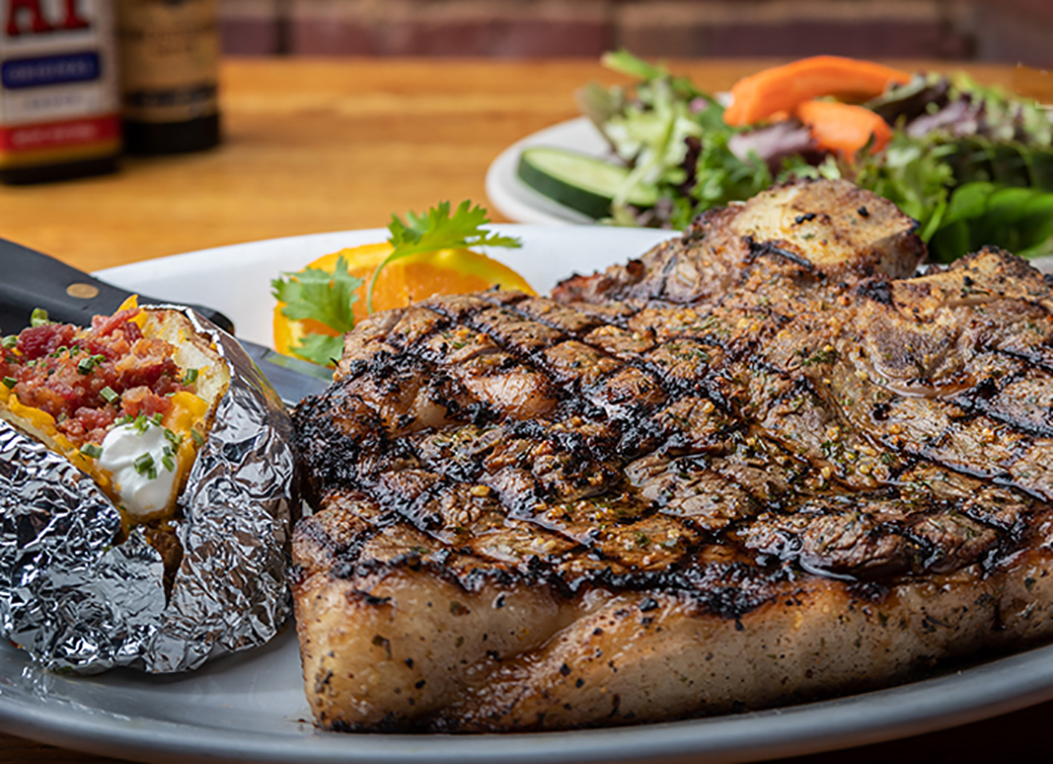 The Jacobs’ bought an old 1912 building along the small downtown strip in the center of town. Darlene and brothers Darryl and Darrin pitched in to renovate it, even though she still had young children at home. “We all worked our regular full time jobs in addition to helping with the restaurant. Then about a year and a half after it opened we decided we needed a family member to manage it, so I stepped in,” Darlene says. Except for a brief hiatus she has been there ever since.

In 2013 Darlene purchased the operation from her parents. “It’s just me now,” she says. “My brothers and parents are doing their own thing now.” But that spirit of kinship still persists. Darlene says, “I do wear many hats but I’m blessed to have a wonderful and committed team. All our servers have been here at least ten years. And a couple on the line have been there 22 years. We all work together like family.” Her youngest son is gaining expertise in everything from waiting tables to tending both bar and grill, and her middle son assists on weekends.

Given the restaurant’s success, Darlene found little reason to make changes when she bought it. She did make one addition, however. “My parents never wanted to sell alcohol, but people do like to have a nice drink with their steak. So the first thing I did was add a bar area,” she says.

Things that won’t change at Five D are quality and consistency. “Those are our number one concerns,” Darlene says. Trained by her dad, she is well qualified to oversee all aspects of processing, all done onsite. Long-time employee Timo Aguilerra handles the butchering, and steaks are aged for 40 days. Regarding sourcing, Darlene says, “I’d love to find a local ranch that could handle our volume. I do have a couple of private ones I do business with, but unfortunately they can’t provide all I need, especially our most popular cuts. So I source from the private ranches as much as possible, but when necessary I move on to the larger packers.”

Other constants at Five D are the warm and casual atmosphere. The historic structure’s red brick, visible on the inside, is complemented by rustic wood finishes and Western memorabilia, including Darlene’s collection of antique firearms. Everyone is made to feel at home, whether in suit and tie or working clothes. “I’m constantly on the floor with customers, finding out where they’re from, thanking them for coming, and getting to know them. We’re blessed that they come from a long way and let them know I appreciate that,” says Darlene. 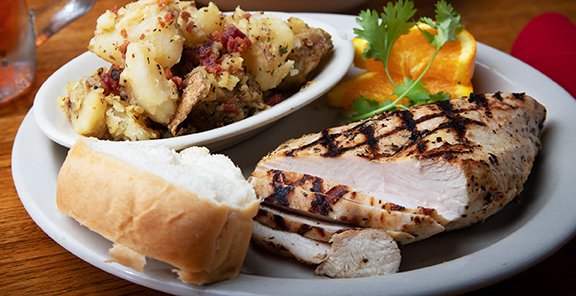 Restaurant and meat market customers can select from quality proteins including New York strip, filet mignon, porterhouse, t-bone, and ribeye, along with seafood and south Texas ranch quail. Guests coming specifically for dinner, and meat market customers who decide to enjoy a meal when they come to pick up an order, can also select from a variety of appetizers and sides. Most popular are the riblets smoked in-house, and cowboy potatoes, diced skin-on, sautéed with onions in butter and garlic, and seasoned with bacon.

Darlene credits her brother Darrin for the functionality that allows their kitchen to churn out great volume while retaining taste and quality. “He has a great engineering mind, and a total knack for creating the most usable space I’ve ever seen in a restaurant—and I’ve seen a lot of them. He and my dad put it together, two people who had no experience in the restaurant business. For 22 years we have put out extreme volume they could never have anticipated, but we’ve never had to rearrange a thing,” she says. Grillmaster Ricky Lewis stokes the fire at the center of that excellent working design most often with local hickory, and sometimes west Texas mesquite.

Five D’s management and patrons are looking forward to an exciting change. A 7000 square foot space next door, occupied by a fish restaurant that opened during Five D’s original renovation, since burned down. Darlene has purchased it and plans new dining and bar space, a fireplace and outdoor patio space. Live music will be offered, which may require extending their present hours. “I know it’s going to stretch me even more,” she says, “It’s a big step, but I’m looking forward to having fun with it. I love what I do, so we’ll make it fun.”