Catering a local Christmas party a couple of years ago, Michael was introduced to Tim House by hostess Meghan Anderson. Michael recalls, “She told me, ‘He’s going to buy that Bartonville Store,’” a small mercantile established in 1882 northwest of Dallas where routes to Denton, Fort Worth, Plano and Justin converged. It served as the social center for the small town, and evolved over the years into a gas station and convenience store where locals could order a fried baloney sandwich, Frito pie and a Dr. Pepper. After earlier fires, the vintage structure was the third for the store, but the name persisted. It closed in 2013.

“Tim said he was going to do barbecue. So I asked him, ‘How about my Meat Shop concept down on Lovers Lane?’” says Michael. The conversation took off, fueled by a natural synergy and a shared love of good food and good music. Ideas flew thick and fast. A bar and live music venue morphed into a meat shop and restaurant, including a market for home meal replacement. House bought and renovated the building, and Michael signed on as managing partner and operator—the concept was underway. 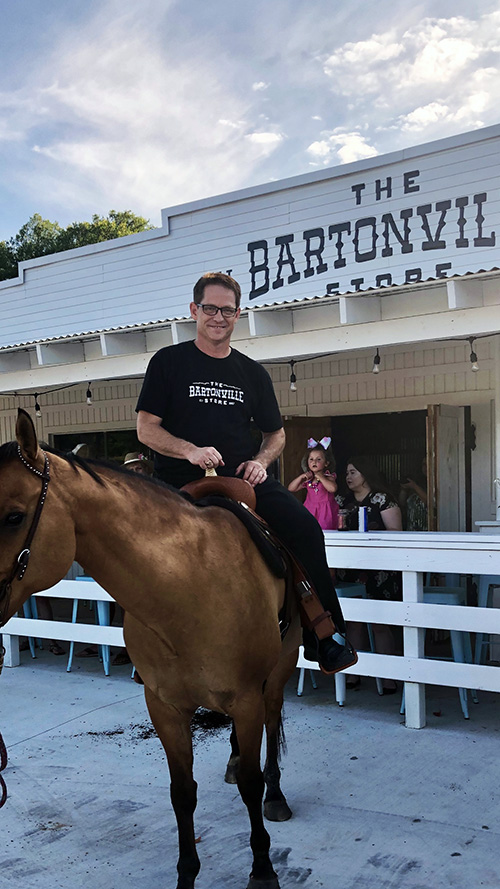 Now two years later, The Bartonville Store and Jeter’s Meat Shop is just concluding their soft opening. They are already once again something of a center of life the largely rural area which includes the nearby communities of Lantana, Argyle and Highland Village. As word spreads, they extend their small-town Texas welcome to city folks driving over from Fort Worth.

One look at the menu confirms that fried baloney sandwiches are definitely a thing of the past. Local average household incomes of 120-130K are driving demand for more discerning dining options, and The Bartonville Store is happy to oblige. “Jeter’s has meat up to $65 a pound for those wanting to grill their meal at home. Our clientele is excited about having access to this quality of a meat shop,” he says. Entrées for dine-in guests range from $13 for house-made Honey Pecan Meatloaf up to $60 for the 12 oz. Kobe Wagyu New York strip.

“We’re a sit-down restaurant, but think of a European style deli. You can order and enjoy your meal in-house—point to a steak in the cabinet, and we’ll take it out, cut it and cook it for you,” explains Michael. “Or you can buy tender belly pork, Rosewood Wagyu beef, or never-ever chicken to cook at home, along with our great sides.”

Their Wagyu product appears in a variety of appetizers and sandwiches, including a burger topped with pastrami, caramelized onions, apple-smoked bacon and horseradish pickles. Sides are ramped-up comfort favorites such as truffle mac-and-cheese with a Hatch chili-pecan crumb topping and fried Brussels sprouts sautéed in balsamic reduction. 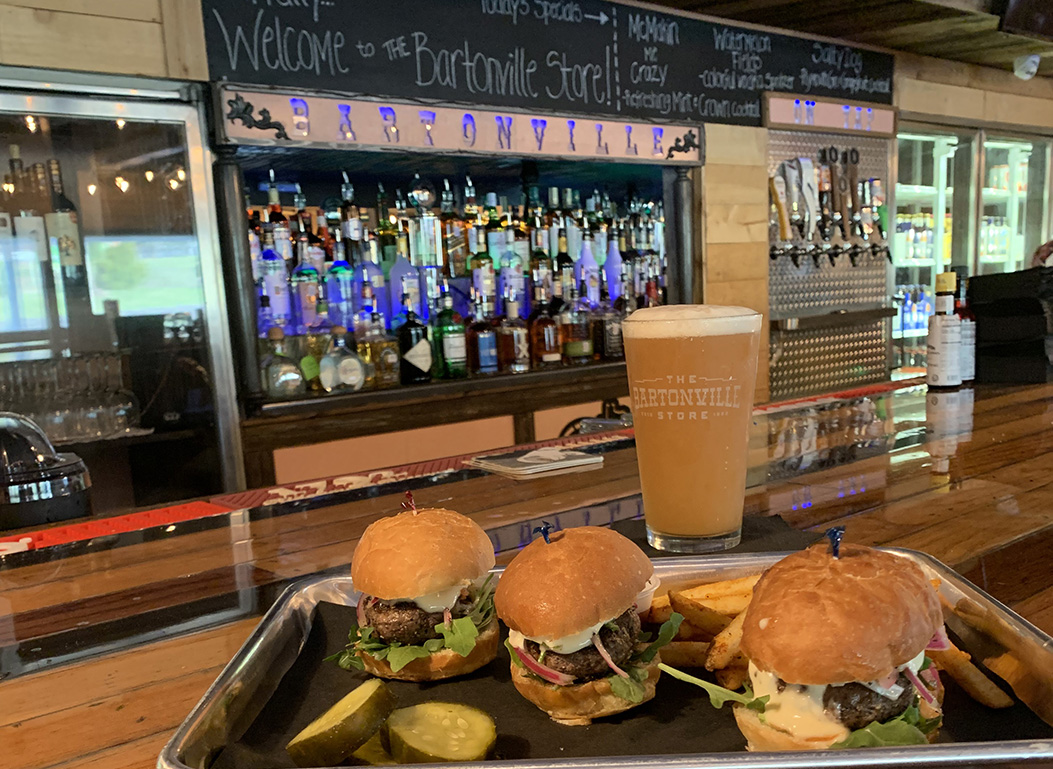 Bartonville’s Wagyu beef comes from Rosewood Ranches just an hour and a half away, where Michael serves as executive chef for the Hunt family and runs sales for their branded beef program. Beyond the beef’s inherent quality, its local sourcing makes it the keystone of the restaurant’s farm-to-table emphasis. The town’s “6.2 square miles of paradise,” as the mayor describes it, extends seamlessly into a countryside offering fresh produce, proteins and more. “The ranch that does our ice cream is just up the road,” Michael says.

Crafting those ingredients into a distinctive menu is the job of Chef Walter Bandt.  “He was born in Dallas but raised in South America. He’s definitely brought a flair to this project. His chimichurri and handmade Wagyu empanadas are signatures,” says Michael.

Such a menu likewise calls for distinctive service, and Michael’s staff is filling the bill. “I spent the year and a half before we opened handpicking the staff,” Michael says. “My bar manager, floor manager and waitstaff have all worked with me on catering and parties, and learned the story of the Wagyu and the Hunt family. They can tell the story tableside. They know how to lay out a charcuterie board, how to sell meat from the counter and get it to the table. It’s a unique skill set that they have, and they’re able to give a great experience to our customers.”

Eighty percent of Michael’s picks came from Japanese restaurants. “They’re good candidates because we are serving Japanese beef,” he chuckles. “I lived and worked in Japan, at sushi bars and all that. I do love the cuisine, but also the way they hire and train their staff. It’s so different than what you see at an American restaurant. I’m very excited about their ability to communicate the spirit of what we’re trying to do here, from both the cuisine side and the historical aspect.” 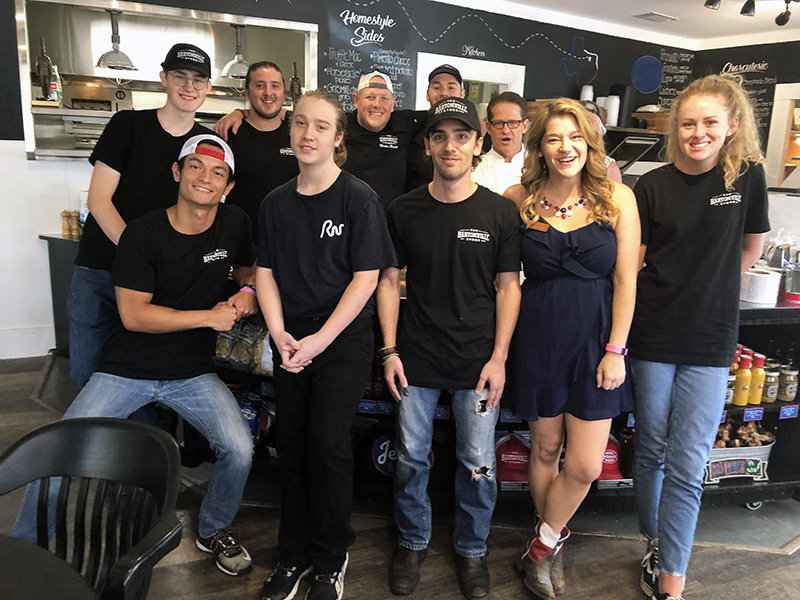 Days are exceedingly busy for Michael and his staff.  Michael has secured zoning approval for an onsite farmer’s market launching September 1, and is working with his Hardie’s rep on adding additional artisan items to round out their retail component. And each evening at 9 p. m., The Bartonville Store transforms into a full-stage music venue, including a corresponding menu change.

All that of course is going on as they work out the kinks of daily maximum-capacity service. “Right now our challenge is having big enough coolers to hold the food. We are literally selling out, and are working on increasing product delivery and cooler space,” says Michael. “Growing pains are to be expected, and we’re delighted that ours include finding ways to accommodate the overwhelming business we’re seeing. And I’m happy to say that so far, we’ve been able to keep up.”